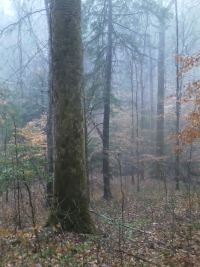 7:42 pm, January 1, 2017. My colleague and I have just returned from a field trip to Bankhead National Forest in western Alabama that marks the most memorable New Year's Day of my life.

7:42 pm, January 1, 2017. My colleague and I have just returned from a field trip to Bankhead National Forest in western Alabama that marks the most memorable New Year's Day of my life. I am a faculty member in the Department of Ecology and Evolutionary Biology as well as Curator of Botany at the University of Colorado. My colleague Dr. James Lendemer of the New York Botanical Garden and I are here spending our entire winter break conducting research for a National Science Foundation Dimensions of Biodiversity grant, which we were awarded last year in collaboration with Drs. Nolan Kane and Christie McCain (both of the University of Colorado). Our immediate goal is to conduct a complete inventory of the lichens of northern Alabama, which represents one of the biggest black holes remaining in North American botany and lichenology. Our longer-term goal is to understand what ecological factors facilitate or constrain the geographical distributions of lichen species across the southern Appalachians; to do this, we are attempting to tease apart abiotic factors (such as temperature, precipitation, elevation, and slope) from biotic factors (such as whether all partners that make up the lichen symbiosis are actually present in the environment in the first place).

The sites we have visited on this trip have all been remarkable in their own right, including Little River Canyon National Park, Skyline Wildlife Management Area, Bucks Pocket State Park, and Russell Cave National Monument. But our visit today was nothing short of extraordinary and, if I'm allowed to say this as a scientist, downright magical. Our destination was the Sipsey Wilderness—renowned host of some of the only virgin forests remaining in Alabama. Our approach began at the Thompson River Trailhead, and the first 6.5 miles set the tone: extensive old growth of numerous different tree species in all directions. Most impressive were huge stands of not only living, but healthy, recruiting Canada hemlock (Tsuga canadensis). This species once filled huge tracts of southern forests but the last twenty years has witnessed near-complete mortality of this species in much of its range owing to infestation from the non-native hemlock wooly adelgid. If this tree survives at all, it may very well be because of this refugium I stand in. As I write, the adelgid has reached northeastern Alabama, just two counties away.

The weather warm and the air thick with a heavy, southern fog, we walked fast to the confluence of the Thompson and Sipsey Rivers and then faster to the confluence with Bee Branch. Most visitors, not that there are many, travel to see "The Big Tree" up East Bee Branch. Slightly itching for an adventure, par for the course when James and I do fieldwork, we opted for the trail-less West Bee Branch. Our choice was risky (Would there be old growth? Would we make it out by dark?) but also potentially very rewarding. We would almost certainly be making the first-ever lichen collections in this drainage, and might additionally stumble on huge, little-known tracts of virgin forest. We chose wisely. Crawling through thorny greenbriar and up and over logs along steep wet dank slopes, we entered a landscape so very rare in eastern North America that most people, indeed most biologists, can little imagine anything comparable let alone experience it. It is that special, and I feel so lucky to be alive on this day. Trees all around approached their maximum sizes: tulip poplar (Liriodendron tulipifera), American beech (Fagus grandifolia), white oak (Quercus alba), big-leaved magnolia (Magnolia macrophylla) and, of course, Canada hemlock. Absolutely massive. Some of these trees approximated 400 centimeters in circumference. We collected lichens for nearly two hours. An Eastern screech owl sat above me for fifteen minutes, curiously watching my every move.

The day got late. James and I were off-trail, and visibility was extremely poor. We still had nearly ten miles to go, and only two hours of daylight. With some backtracking, we eventually navigated our way up a narrow passage to climb successfully out of a canyon protected by vertical walls. These same walls surely served as shelter from a different kind of (potential) prospector, back during the height of the logging era in the early twentieth century. We pointed the compass in a northeasterly direction, eventually hit a horse trail, and with huge sacks of rocks on our backs, hightailed it to the car arriving as the sun went down.

Biologists who discover special places tend to try to keep such secrets to themselves. Via a trip(p) report such as this one, I had a moment of thinking that I should warn off prospective visitors by writing something like this instead: DO NOT GO UP THE WEST BEE BRANCH—IT IS TERRIBLE. But a place so special ought to be celebrated. Over the course of twelve hours the subsequent day in the lab, James and I would document an incredible number of lichen species from West Bee Branch, at least one hundred of them within only a single hectare of forest, several of these disjunct from the Gulf and Atlantic Coastal Plain, and several others new to science.

Acknowledgements: We sincerely acknowledge the numerous land managers in Alabama with whom we have collaborated to conduct fieldwork on state and federal lands, including the US Forest Service, the National Park Service, US Fish and Wildlife Service, Alabama State Parks, and Alabama Forever Wild (including Wildlife Management Areas).

Erin A. Tripp is assistant professor in the Department of Ecology and Evolutionary Biology and curator of botany at the Museum of Natural History, University of Colorado Boulder. She is a biodiversity scientist whose research focuses on the diversity and evolution of flowering plants and lichens and was the recipient of the 2011 George R. Cooley Award from the Botanical Society of America. Her book Field Guide to the Lichens of White Rocks (Boulder, Colorado) will be available in February 2017.