A Tour of Duty in the Pacific Northwest

by E. A. Porcher, edited by Dwight L. Smith 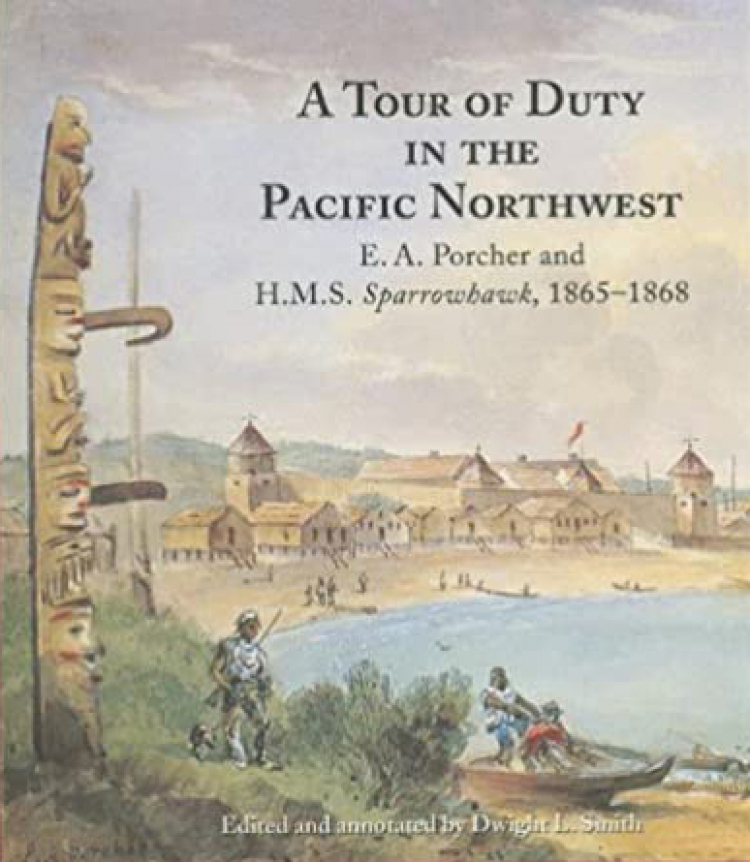 "The present book, which includes the personal journal of Sparrowhawk's commanding officer, Commander Edmund A. Porcher, RN, and excellent colour reproductions of fifty-three of the watercolour sketches he made to illustrate it, adds detail and a sense of immediacy to the literature on the north-western frontier of North America. One of the strengths of this book is the care with which the editor has studied the literature and archives in order to place the journal in context. There is a full introductory essay. In addition, the editor has lavishly annotated Procher's text to clarify obscure words and passages, identify people and localities, and direct the reader to other accounts of the incidents mentioned."
—The International History Review

"The book is of special value to any reader interested in the Royal Navy, imperial history, or artistic aspects of life and the natural world in the mid-Victorian period. . . . The journal provides a rare and comprehensive firsthand account of a ship and its crew with details of the Royal Navy's role in imperial functions as well as the crew's, particularly the officers', role in the social and political life of distant colonies. Perhaps the book's most fascinating feature is the series of illustrations drawn by Porcher himself. Blessed with a keen and observant eye, extensive scientific knowledge, and a talent for drawing and illustration . . . he made extensive drawings of the natural features of the region, the native peoples, and European settlements."
—Pacific Northwest Quarterly

Porcher's journal reveals a man who strived to do his duty by the lights of the British Empire. That duty took Porcher to Esquimalt, Royal Navy headquarters for the Pacific, by way of a seven-month transit from England around South America, to Hawaii, and finally to British Columbia. Fortunately, the dutiful navy officer was also an enthusiastic tourist; we have not only his words to recount what he saw, but also a remarkable array of sensitive and skillfully rendered watercolors. His paintings captured people and places, totems and tombs, scenes and ships. The posting of his sail/steam vessel Sparrowhawk in Esquimalt was full of adventures for captain and crew typical of the time and place; she carried mail to San Francisco, bore the governor north for the ceremonial transfer of Alaska from Russia to the U.S., rescued crews of wrecked vessels, and went on the alert to thwart a Fenian threat. Dwight Smith has provided the thoughtful editing and annotation necessary to permit present-day readers to appreciate Porcher's efforts, bringing this book beyond the purely scholarly and into the realm of general interest.