An Insider's Look at Making Spectacular Images of Space

by Travis A. Rector, Kimberly Kowal Arcand, and Megan Watzke 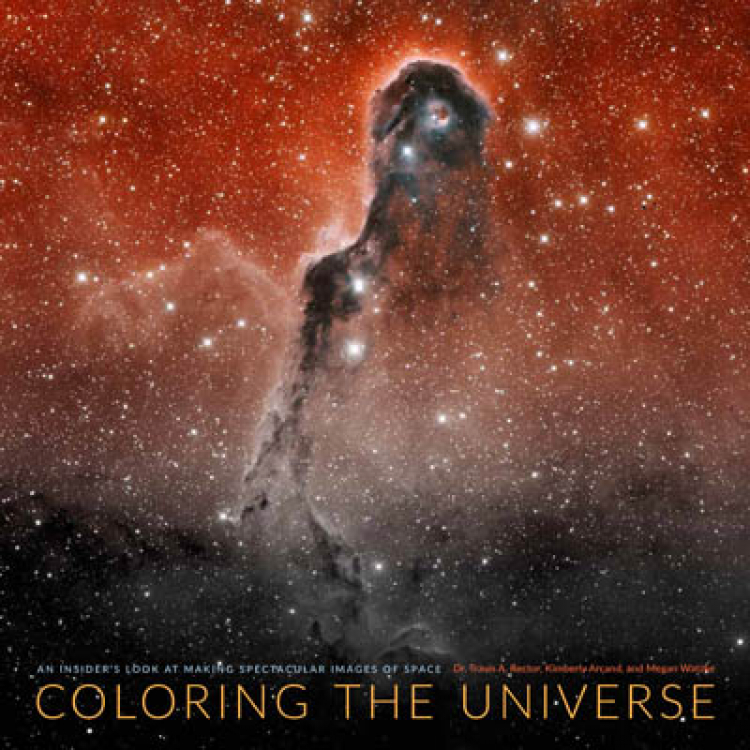 "What singles this book out is how it lifts the curtain on the processes by which these spectacular images are made. There are explanations of the astrophysics of celestial objects, how telescopes and cameras capture and record light, as well as the software techniques used to create these striking images. . . . After reading it you’ll probably never look at an astronomy image in quite the same way again."
—BBCs Sky at Night Magazine

"In an era when NASA’s vast photographic archive is a click away and even the Curiosity Rover is on Instagram, it’s easy to lose sight of the fact that photographing the cosmos is an amazing achievement and a complex process. Travis Rector reminds us of this in his excellent book, Coloring the Universe. Rector is an astronomer and an expert on the topic; he’s used everything from the Hubble Space Telescope to the Very Large Array to make more than 250 photos during the past two decades. He and his co-authors, Kim Arcand and Megan Watzke of the Chandra X-Ray Observatory, bring a photographer’s sensibility to the book, explaining just how NASA made some of the stunning photos we too often take for granted."
—WIRED

"Astronomer Travis Rector wanted to create more than a coffee-table book of celestial images when he set out to make Coloring the Universe. Rector wanted to answer the questions he hears most frequently at showings of his astrophotography: “Are these real?” and “Is this what it really looks like.” . . . The authors tell the history of astrophotography, from black-and-white photographic plates to digital images, and explain the various forms of astronomy that allow us to see the invisible."
—Arizona Daily Star

"Fascinating, beautiful, and educational. . . . Few things in life are more vibrant, more beautiful and more majestic than images of space. Thankfully, Coloring the Universe presents everything from nebulas, supernovas, distant galaxies and beyond in one jaw-dropping book."
—South China Morning Post

"The winning astronomy book to get for anyone who loves and also is curious about the most beautiful images of the Universe, plus what they mean, is Coloring the Universe. With each image you look at after reading it, as well as images that you think back on that you’ve seen before, you’ll wind up seeing more, not less, than you ever saw before. It’s not just a beautiful glimpse into the Universe; it’s a peek behind-the-scenes at how astronomers are creatively and artistically enabling humanity to see the full extent of what’s present."
—Forbes

"Few things in life are more vibrant, more beautiful and more majestic than images of space. Thankfully, Coloring the Universe: An Insider's Look at Making Spectacular Images of Space"by Travis A. Rector, Kimberly Arcand and Megan Watzke presents everything from nebulae, supernovas, distant galaxies and beyond in one jaw-dropping book."
—The Chicago Tribune

With a fleet of telescopes in space and giant observatories on the ground, professional astronomers produce hundreds of spectacular images of space every year. These colorful pictures have become infused into popular culture and can be found everywhere, from advertising to television shows to memes. But they also invite questions: Is this what outer space really looks like? Are the colors real? And how do these images get from the stars to our screens? Coloring the Universe uses accessible language to describe how these giant telescopes work, what scientists learn with them, and how they are used to make color images. It talks about how otherwise un-seeable rays, such as radio waves, infrared light, X-rays, and gamma rays, are turned into recognizable colors. And it is filled with fantastic images taken in faraway pockets of the universe. Informative and beautiful, Coloring the Universe will give space fans of all levels an insider’s look at how scientists bring deep space into brilliant focus.

Travis A. Rector is professor of physics and astronomy at the University of Alaska Anchorage. He has created over 200 images with the giant telescopes at Gemini Observatory, Kitt Peak National Observatory, the National Radio Astronomy Observatory, and others.

Megan Watzke is the public affairs officer for the CXC.