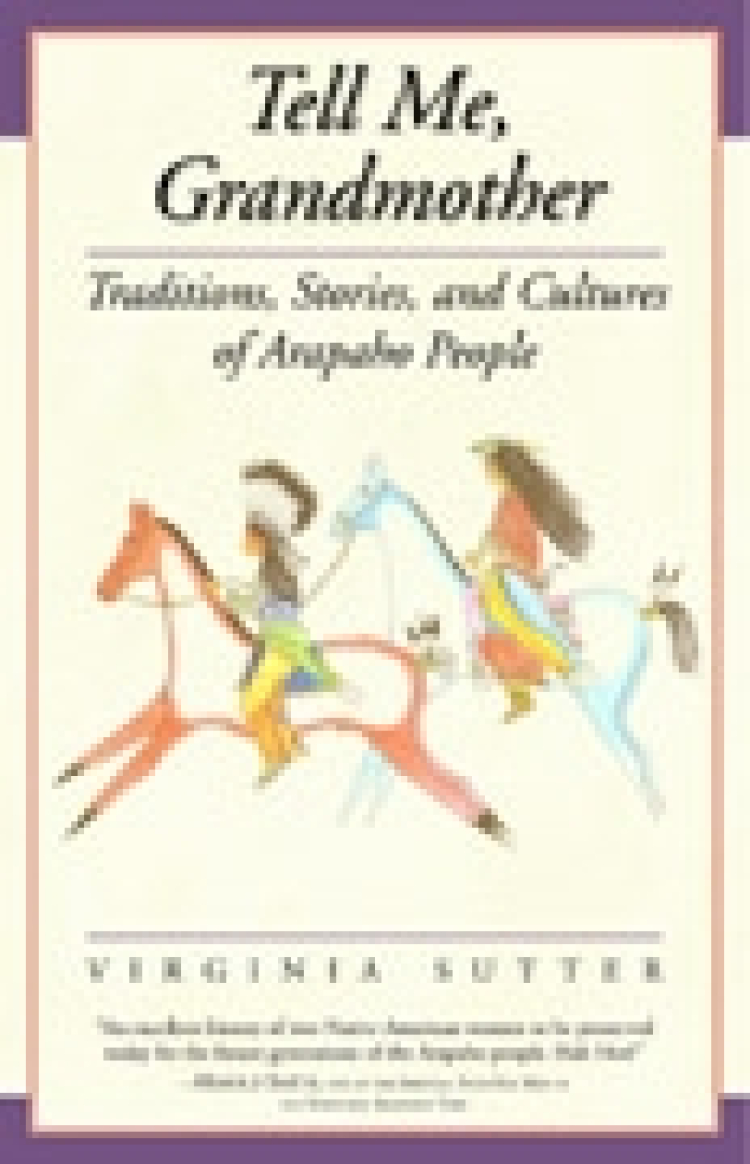 "The book's unique format of biography and autobiography serves to compare the experiences of two women belonging to different centuries."
—Journal of the West

"In Tell Me, Grandmother, Virginia Sutter weaves Arapaho oral history and personal reflection in imagined conversation between herself and her great-grandmother, Goes in Lodge, whom she has never met. It is uniquely part memoir, part biography and part historical chronology. Sutter brings a human element to the customs of a people once free to roam open prairie and documents the drastic Native American cultural upheaval that occurred during the 1800s and persists in present day social challenges . . . an engaging story accented by black and white family portraits and pertinent historic photos. In this journey of individual cultural discovery, Tell Me, Grandmother at once educates us in the history of a threatened people while offering her own trials growing up part Indian in a world still full of powerful prejudices."
—Wyoming Library Roundup

"Tell Me, Grandmother contributes to our understanding of the myriad experiences of American Indian women, with an emphasis on the twentieth century."
—Western Historical Quarterly

"Virginia Sutter's account of her life is important as a life history of an enrolled tribal member who returned to the reservation with an interest in helping the community. There are many Native individuals who have chosen to do this and very little published information on their experiences. This book is also a well-written account accessible to a broad audience."
—Great Plains Quarterly

"An excellent history of two Native American women to be preserved today for the future generations of the Arapaho people. Hah Hoe!"
—Harold Smith, of the Northern Arapaho Tribe

"[A] readable portrayal of both the acute losses and the cultural survival of the Arapaho people."
—Watonga Republican

"Virginia Sutter uses an interesting technique to write the history of her people, the Northern Arapaho Indian Nation. She constructs her work as a series of conversations between herself and her paternal great-grandmother. . . . [T]hrough this device, the history of the Arapaho people is traced from the early nineteenth-century years, when the buffalo ran aplenty and the prairies were boundless, through present-day living conditions in American Indian tribal reservations."
—Moira Richards, www.WomenWriters.net

"Emblematic of the struggle of so many Native Americans of the twentieth century, who seek to reconcile modernity with tradition, and who struggle to recast, reframe, and restore what is Native, even as the majority culture has done its best to uproot, separate, and tell Natives that they can be either modern or Native, but certainly not both."
—Brian Hosmer, Studies in American Indian Literatures (SAIL)

Tell Me, Grandmother is at once the biography of Goes-in-Lodge, a traditional Arapaho woman of the nineteenth century, and the autobiography of her descendant, Virginia Sutter, a modern Arapaho woman with a Ph.D. in public administration. Sutter adeptly weaves her own story with that of Goes-in-Lodge—who, in addition to being Sutter's great-grandmother, was first wife of Sharpnose, the last chief of the Northern Arapaho nation.

Writing in a question-and-answer format between twentieth-century granddaughter and matriarchal ancestor, Sutter discusses four generations of home life, including details about child rearing, education, courtship, marriage, birthing, and burial. Sutter's portrait of Goes-in-Lodge is based on tribal history and interviews with tribal members. Goes-in-Lodge speaks of social and ceremonial gatherings, the Sun Dance, the sweat lodges, and the changes that took place on the Great Plains throughout her lifetime. Sutter details her own life as a child born in a teepee to a white mother and Indian father and the discrimination and injustice she faced struggling to make her way in an increasingly Euro-American world.

Author, elder, and activist Virginia Sutter is an enrolled member of the Northern Arapaho Indian Nation. She is Executive Director of the Fresno Native American Health Center, Inc.