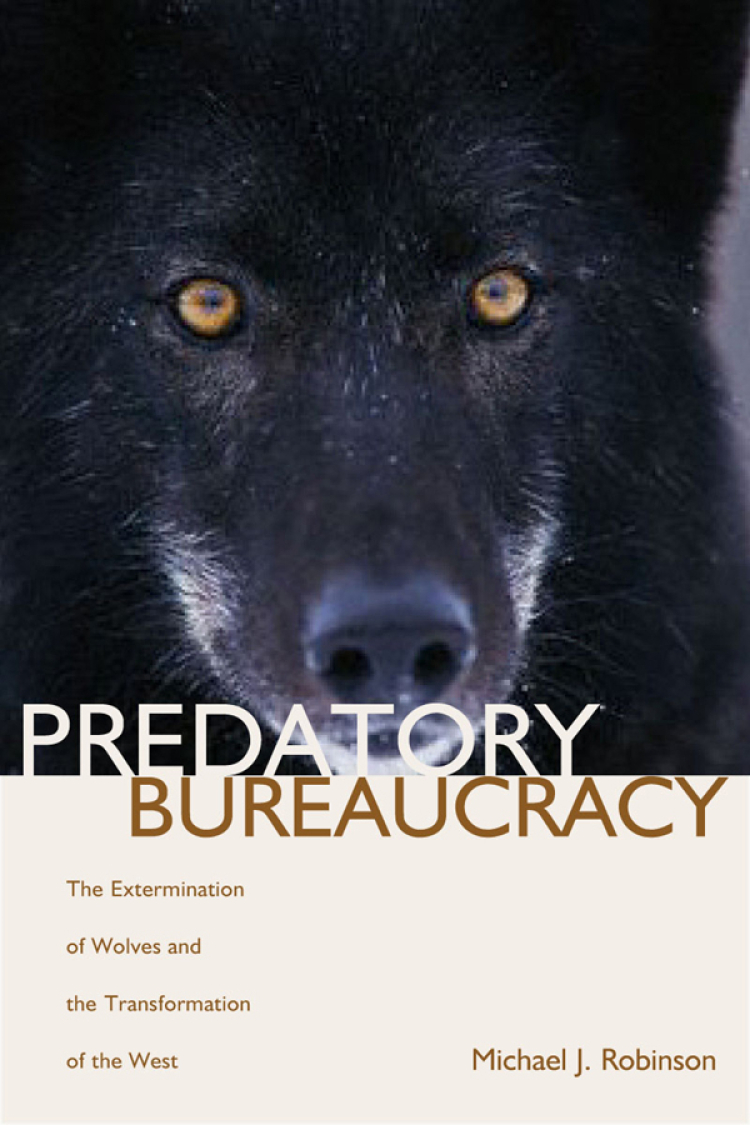 Paperback Price $25.95
Buy Now
"This well-written history emphasizes wolf control from the mid-1800s to 2005. Robinson (Center for Biological Diversity) discusses wolves' adaptations over time and chronicles the history of the U.S. Bureau of Biological Survey, the federal agency responsible for the massive extermination of wolves in the western U.S. . . . The potential insights here apply to bureaucracies in general, not just to predator control agencies."

"The book brings together a formative history of the dewilding of the western United States, with a focus on the history of predator control of wolves, and an in-depth history of wildlife politics and those that drove the structuring of wildlife laws we currently use. . . . The book inspires the reader to look at the land as a scientist, not a researcher of a particular species, not as a mammalogist, or an ornithologist, or a botanist, but as someone committed to the land ethic first taught by Aldo Leopold, and committed to the future of the landscape, with wolves, coyotes, pronghorn, and the myriad species that make the land what it was, and is, and should be in the future."
—Journal of Mammalogy

"Predatory Bureaucracy is, first and foremost, a work of tremendous scholarship. . . . Surprisingly, it is also a beautifully written book that captures the feel of western landscapes and the ethos of early 20th-century America with an eloquence unusual for a weighty, scholarly book."
—International Wolf Magazine

"This volume is nothing short of an exhaustive investigation into predator control in the American West, going back more than 100 years. The focus is on rogue wolves, the rogue hunters who pursued them (it's not just the predators who show up as 'varmints'), and the government (our own) that funded the extermination, for the belief at the time was that every wolf had to go."
—Silver City Sun-News

"Far from being a dry chronology, Robinson's book brings history to life through personal accounts. . . . The author makes a powerful argument against repeating history by allowing politics and prejudice to destroy this vital part of Western ecosystems."
—High Country News

"In Predatory Bureaucracy Michael Robinson paints a vivid picture of the lives of some of the last wolves to roam in the West and of the men who planned and carried out their killings, and tells the remarkable story of passage of the Endangered Species Act and subsequent wolf reintroductions in the face of continuing fierce opposition. Through exhaustive review of thousands of personal letters, policy documents and other obscure records, Robinson chronicles the birth, growth, and cultural maturation of an agency whose primary mission is the extermination of 'bad' animals at the behest of the agricultural industry—a case study of the dark side of biopolitics. He documents the Machiavellian tactics used by powerful individuals to federalize the 'service' of killing predators and other 'harmful' animals. Robinson tells this important story in a compulsively readable manner. Predatory Bureaucracy should be read by all who care about wildlife conservation, especially government biologists."
—David R. Parsons, Wildlife Biologist and former Mexican Wolf Recovery Coordinator for the U.S. Fish and Wildlife Service

"This book makes a significant contribution to the history of wildlife policy in the West, and is particularly strong on describing the origins and development of federal extermination programs."
—Frank Van Nuys, Journal of the West

"The root problem in the relationship between humans and Nature is our pathological drive to domesticate the land and to destroy those wild animals that do not accept our overlordship. Michael Robinson's thorough history of our war against the wolf in the West is an insightful, eloquent, humble, and much needed study of that problem. Predatory Bureaucracy is deep and wise."
—Dave Foreman

"The wolf holds center stage in Michael Robinson's extraordinary book, Predatory Bureaucracy, but his subject is something even more troubling than the wolf's near extinction—American attempts to tinker with the machinery of nature, and the unkillable government office that came up with one bright idea after another for controlling predators, while ignoring the role of predators in controlling 'pests' and 'varmints' like mice and gophers. In Robinson's hundred-year history of federal failure to decide what it wants we can see the great American schizophrenia writ plain—love of wilderness, fear of the wild, with wolves trapped in the middle."
—Pulitzer Prize-winner Thomas Powers, author of Intelligence Wars, Heisenberg's War, and The Man Who Kept the Secrets

Predatory Bureaucracy is the definitive history of America's wolves and our policies toward predators. Tracking wolves from the days of the conquistadors to the present, author Michael Robinson shows that their story merges with that of the U.S. Bureau of Biological Survey. This federal agency was chartered to research insects and birds but—because of various pressures—morphed into a political powerhouse dedicated to killing wolves and other wildlife.

Robinson follows wolves' successful adaptation to the arrival of explorers, mountain men, and bounty hunters, through their disastrous century-long entanglement with the federal government. He shares the parallel story of the Biological Survey's rise, detailing the personal, social, geographic, and political forces that allowed it to thrive despite opposition from hunters, animal lovers, scientists, environmentalists, and presidents.

Federal predator control nearly eliminated wolves throughout the United States and Mexico and radically changed American lands and wildlife populations. It undercut the livelihoods of countless homestead families in order to benefit an emerging western elite of livestock owners. The extermination of predators led to problems associated with prey overpopulation, but, as Robinson reveals, extermination and control programs still continue. Predatory Bureaucracy will fascinate readers interested in wildlife, ecosystems, agriculture, and environmental politics.

This publication was supported in part by the Summerlee Foundation.

Michael J. Robinson is carnivore conservation coordinator for the Center for Biological Diversity. He lives in New Mexico.