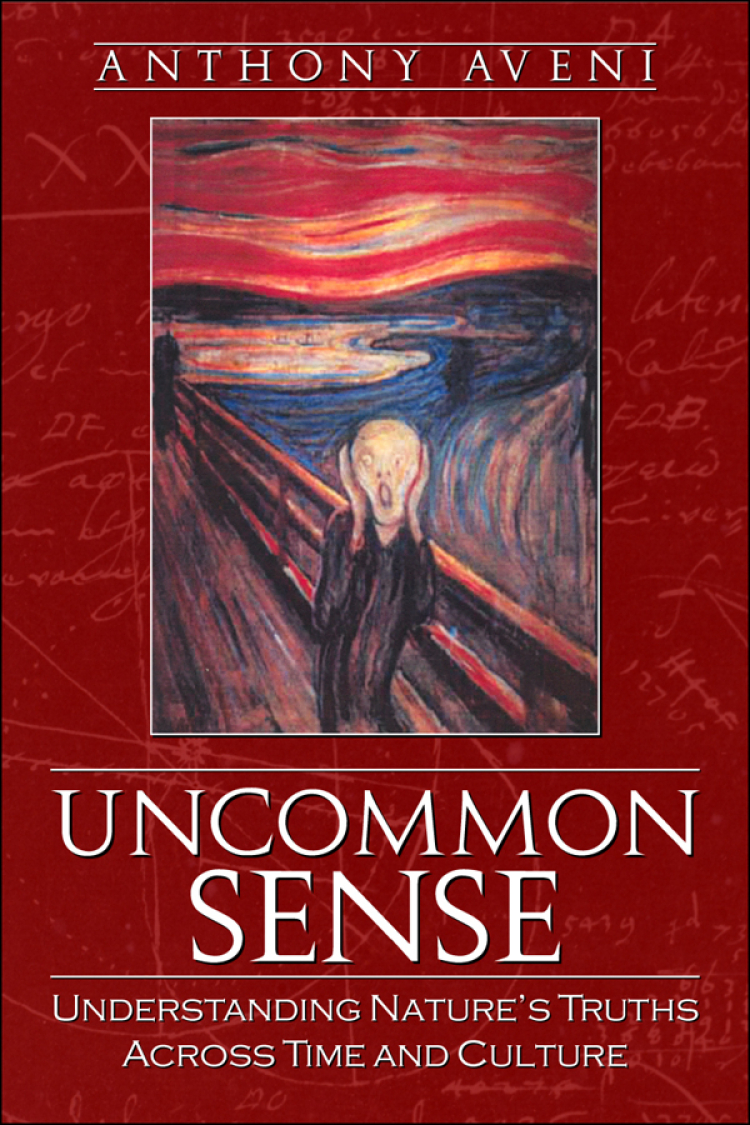 "Anthony Aveni is a passionate scholar and a vivid, engaging writer. Uncommon Sense shows that he is a polymath, too, with an astounding range of interests and knowledge. Like Jared Diamond, Aveni is a brilliant synthesizer, and a delightful one. From cosmology to evolution to mythology to historical and personal anecdotes, Uncommon Sense explores the very essence of religion, science and truth across many cultures, from the vantage point of an uncommonly spacious mind."
—Oliver Sacks

"People seek answers about the world around them and approach mysteries such as the star of Bethlehem or the entire cosmos via both science and religion. Aveni asserts that those two realms are thus unavoidably intertwined. In ten essays, the author, an astronomical anthropologist, explores the similarities among the ways in which various cultures approach knowledge. For instance, all cultures have developed a numerical system of representation, clocks for marking the passage of time, maps to mark territory, and categories for things from colors to animals to people. Aveni provides a cross-cultural survey of the questions people ask about the world and the methods they use to answer them."
—Science News

"[Uncommon Sense] explores the patterns created by humans of many cultures and time periods—the maps we make, the star charts we follow, the ordering of the universe and our place in it. . . . Aveni discusses the endless fascination people have with decoding old mysteries; looking for scientific proof of events in religious texts; finding hidden, secret patterns that were unknown before or unexplained or lost in antiquity. . . . Humans are pattern creators—or maybe we're just seekers, with an unquenchable thirst for finding patterns in nature's chaos. That is the essence of this fascinating book I'll be thinking about for years to come."
—About.com

"[Aveni] writes with a mastery and polish that is wonderfully accessible."
—The New York Times Book Review

"Aveni writes accessible prose, and even somewhat technical explanations of systems or events are made easily comprehensible to the non-scientist. All explanations of what we observe, even scientific ones, may be seen as metaphors, or stories that we tell in order to make sense of what we observe. But, Rashomon-like, this book reminds us that stories can be told in a number of different ways, and that determining 'the truth' depends on where you are, and when."
—Tonia L. Payne, Isle

The divide between teaching 'intelligent design' and evolution in U.S. schools has brought to the public eye a struggle that archaeoastronomer Anthony Aveni argues is as old as culture itself. All societies seek to understand the natural world, but their search is shaped by culturally distinct views and experiences. In Uncommon Sense, Aveni explores the common and conflicting ways that ancient and contemporary societies have searched for the literal truth about the natural world's mysteries, from dinosaur bones to the Star of Bethlehem. Aveni demonstrates that a society's approach to making sense of the natural world can serve as a working definition of its culture, so strongly does it resonate with fundamental values and assumptions.

In ten fascinating essays, Aveni examines topics that have absorbed scientists, religious figures, and ordinary citizens over the centuries. He traces the tug of war between astronomy and astrology, reveals the underpinnings of our notions of cartography and the representation of space and time, and much more.

Readers interested in science, history, and world cultures will revel in this celebration of different cultures—common and uncommon questions and conclusions about the natural world.

Magic, Science, and the Occult from Antiquity Through the New Age Revised Edition