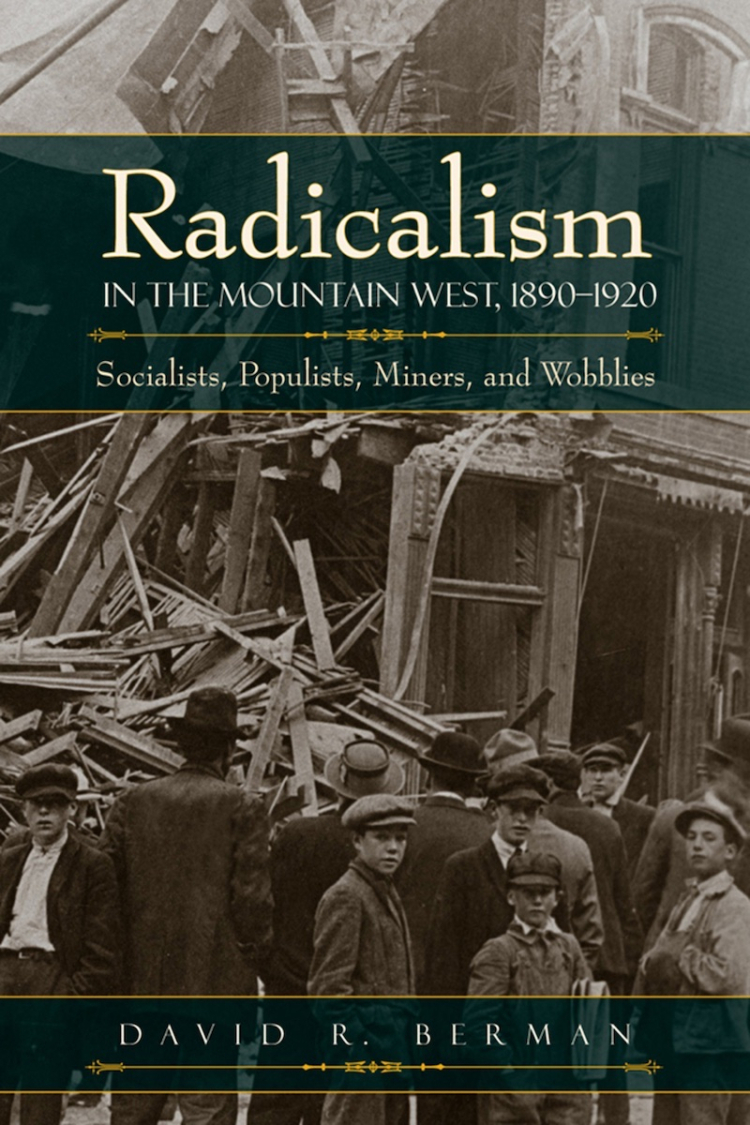 "Berman presents a comprehensive monograph that synthesizes the work of other historians and adds to it with ample archival research all with the Intermountain West. . . . Few historians have given Mountain West populists such thorough attention and Berman should be commended for that."
—Greg Hall, Western Historical Quarterly

"Well organized and argued, Radicalism in the Mountain West is an essential addition to the history of radicalism in the United States."
—Robert A. Goldberg, Journal of the West

"The clear, straightforward style along with the liberal use of direct quotes from historical figures make this a very readable and engaging book. . . . Radicalism in the Mountain West fills a significant gap in the historical literature."
—David Brundage, University of California, Santa Cruz

"The author deserves generous thanks not only for the information presented in this book but also for the possible effect of prompting readers to think about and compare bipartisan efforts in Congress which blurred the lines between the left and the right in the past with similar efforts today. When reading or using a book like Radicalism in the Mountain West, you can feel confident you're in the competent hands of a master of his subject."
—Virginia McConnell Simmons, Colorado Central Magazine

"[A] highly readable account of the history of radicalism in the Populist Party, Socialist Party, Western Federation of Miners and Industrial Workers of the World in Arizona, Utah, Nevada, Idaho, Montana, Wyoming, Colorado, and New Mexico. This crisply written narrative offers an unprecedented look into the region's radical past."
—Tucson Citizen

"Radicalism in the Mountain West makes a significant contribution to our understanding of radical politics in [western mountain] states and, I hope, represents a renewed interest in western socialism."
—Jeffrey Johnson, Montana: The Magazine of Western History

"[Berman's] attempt is to begin to recover that aspect of the region's past, specifying its thematic patters, its turbulence, passion, conflict, risk-taking, ethical witnessing, and violent confrontations. The book is an important contribution to our understanding of radicalism in the region and throughout the United States. It is deeply researched, bringing together the secondary literature on the subject and Berman's own considerable research in primary sources."
—John McCormick, Utah Historical Quarterly

"David Berman's book . . . explains a many-faceted working class activism and politics in dozens of western places. Most of Berman's work is about that portion of the nation's populist and socialist history that occurred in the Rockies, the Great Basin, and on the Colorado Plateau, but he connects local events to national third party struggles."
—Phil Mellinger, 2008 Mining History Journal

"Berman moves us toward a much-needed summary of socialism and political radicalism in the Rocky Mountain West."
—Journal of American History

"Berman's highly readable text makes this an engrossing look into a fascinating chapter in American History and an important addition to the library of homegrown leftist political science. "
—Bill Cunningham, Southwestern American Literature

Radicalism in the Mountain West, 1890-1920 traces the history of radicalism in the Populist Party, Socialist Party, Western Federation of Miners, and Industrial Workers of the World in Arizona, Utah, Nevada, Idaho, Montana, Wyoming, Colorado, and New Mexico.

Focusing on the populist and socialist movements, David R. Berman sheds light on American radicalism with this study of a region that epitomized its rise and fall. As the frontier industrialized, self-reliant pioneers and prospectors transformed into wage-laborers for major corporations with government, military, and church ties. Economically and politically stymied, westerners rallied around homegrown radicals such as William "Big Bill" Haywood and Vincent "the Saint" St. John and touring agitators such as Eugene Debs and Mary "Mother" Jones. Radicalism in the Mountain West tells how volleys of strikes, property damage, executions, and deportations ensued in the absence of negotiation.

Drawing on years of archival research and diverse materials such as radical newspapers, reports filed by labor spies and government agents, and records of votes, subscriptions, and memberships, Berman offers Western historians and political scientists an unprecedented view into the region's radical past.