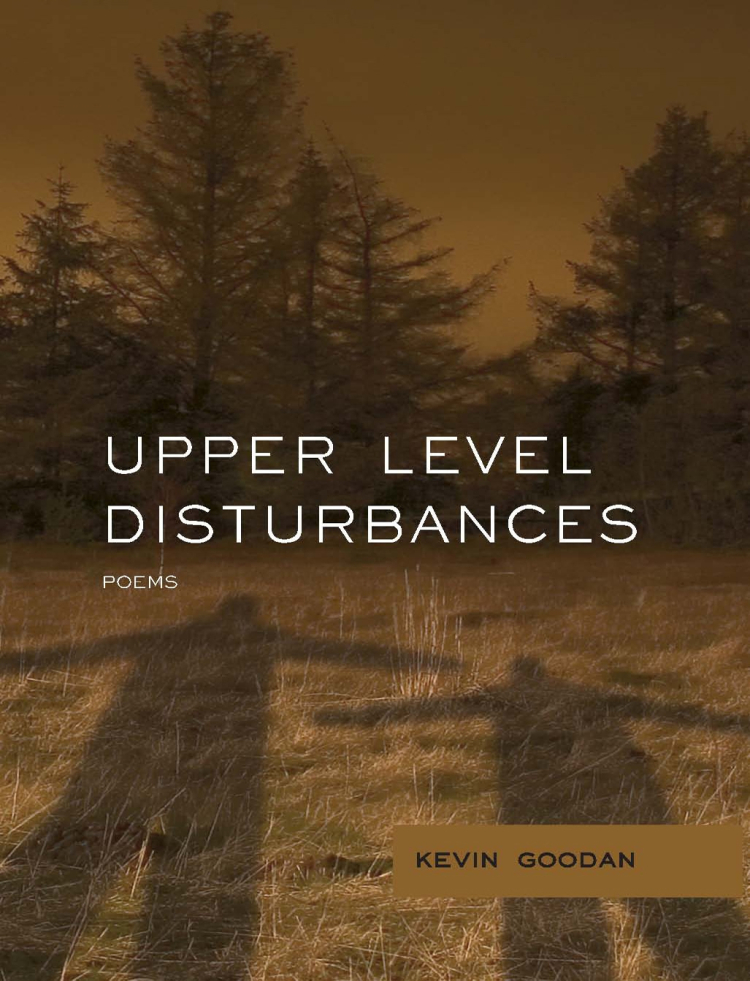 "Kevin Goodan's poems embody a quiet, incandescent fierceness, fueled by loss, but still able to seek and find a place to dwell, despite the upper level disturbances he encounters in the disappearance of rivers, the uncertainty of—and fissures in—language, the elusiveness of a god, and the diminishment of rural America. These poems are raw and hyper-honest in their regard of a world in which 'every moment is a landscape / We enter, depart, at the same time.'"
—Christopher Arigo, author of Lit Interim and In the Archives

"In Kevin Goodan's Upper Level Disturbances, we are given the 'whispered home to the lightning' where 'the levees sing of snake-grass burning.' With a steady hand, Goodan unfurls the line into the rough and jagged physicality of the world until the sublime transcends its earthly frame. These are hard-earned poems, brought back to us from a difficult land. They are 'prayers . . . adorned with rivets of fire' within which the 'laws of nature / Determine all the grief one eye can hold.' Upper Level Disturbances is one helluva good book, and I recommend it highly."
—Brian Turner, author of Here, Bullet, and Phantom Noise

"The gentle, consistent descriptions of the natural world are what drive this collection forward. The conclusions and abstractions are sparse, which lends them weight. However, this is not a heavy book, despite the aloneness, the ghosts and the carcasses. It is reminiscent of how the senses come alive when in an environment devoid of peoples and how the sense of tragedy in the destruction of things becomes a merely a human perspective."
—NewPages.com

Kevin Goodan earned his BA from the University of Montana and worked as a firefighter for ten years in the U.S. Forest Service before receiving his MFA from the University of Massachusetts-Amherst. His previous poetry collections are In the Ghost-House Acquainted and Winter Tenor, and he was a featured poet at the 2014 Geraldine R. Dodge Poetry Festival. He currently resides in Idaho and is assistant professor of English at Lewis-Clark State College.