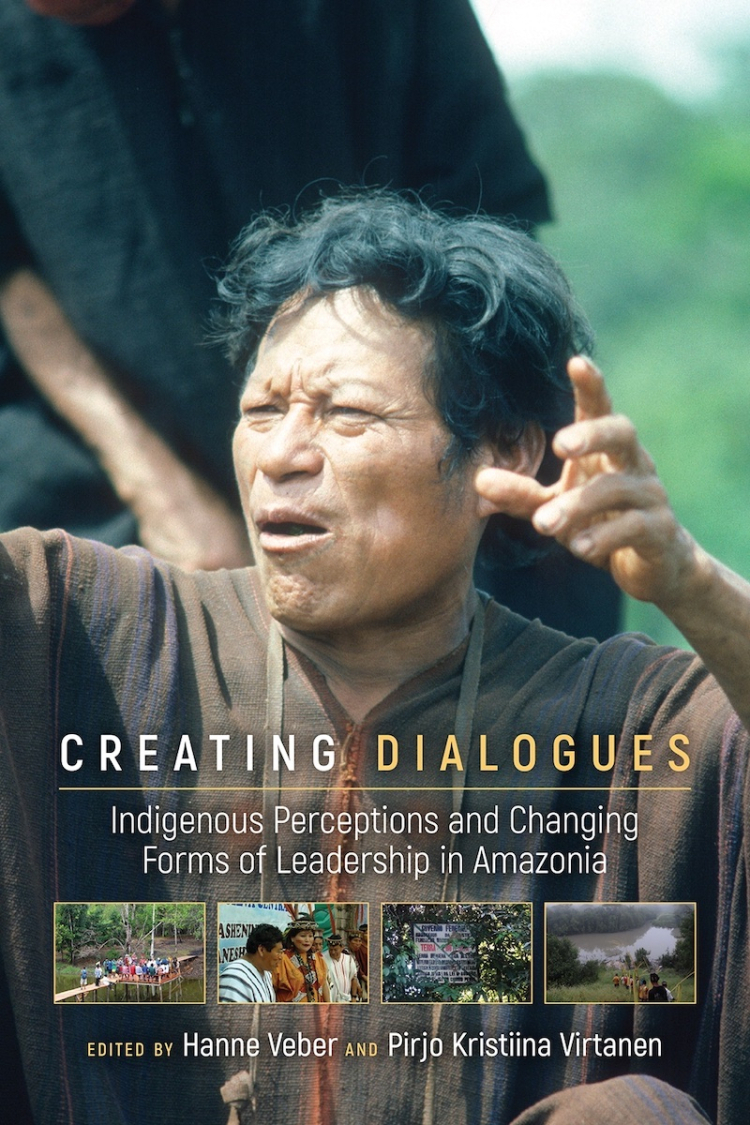 Paperback Price $37.95
Ebook Price $31.95
30-day ebook rental price $16.00
Buy Now
"​A must-​read for anyone hoping to understand the new forms of leadership and conceptualizations of power emerging among indigenous peoples of lowland South America in the twenty-first century. Creating Dialogues gives voice to a diverse range of indigenous leaders who are at the forefront of desperate—often life-and-death—struggles to develop social and economic policies that prioritize the sustainable use of rainforests.​"

"This outstanding collection destabilizes long-standing assumptions of leadership to bring us fresh insights and immediacy about a matter too often taken for granted. In eleven ethnographic examples from Peru, Brazil, Bolivia, and French Guiana, the highly qualified contributors to this volume demonstrate the interdependence of the local and the global as well as the invaluable role of research at the interstices—at the very sites of articulation and mutual transformation. The result is a timely and essential resource."

Creating Dialogues discusses contemporary forms of leadership in a variety of Amazonian indigenous groups. Examining the creation of indigenous leaders as political subjects in the context of contemporary state policies of democratization and exploitation of natural resources, the book addresses issues of resilience and adaptation at the level of local community politics in lowland South America.

Contributors investigate how indigenous peoples perceive themselves as incorporated into the structures of states and how they tend to see the states as accomplices of the private companies and non-indigenous settlers who colonize or devastate indigenous lands. Adapting to the impacts of changing political and economic environments, leaders adopt new organizational forms, participate in electoral processes, become adept in the use of social media, experiment with cultural revitalization and new forms of performance designed to reach non-indigenous publics, and find allies in support of indigenous and human rights claims to secure indigenous territories and conditions for survival. Through these multiple transformations, the new styles and manners of leadership are embedded in indigenous notions of power and authority whose shifting trajectories predate contemporary political conjunctures.

Despite the democratization of many Latin American countries and international attention to human rights efforts, indigenous participation in political arenas is still peripheral. Creating Dialogues sheds light on dramatic, ongoing social and political changes within Amazonian indigenous groups. The volume will be of interest to students and scholars of anthropology, ethnology, Latin American studies, and indigenous studies, as well as governmental and nongovernmental organizations working with Amazonian groups.

Pirjo Kristiina Virtanen is assistant professor of Indigenous Studies at the University of Helsinki. She is also affiliated with the Centre EREA, Université Paris Ouest, Nanterre La Défense. Her publications include Indigenous Youth in Brazilian Amazonia, as well as several edited books and articles on mobility, shamanism, adolescence, indigenous politics, ethnohistory, and indigenous ontologies and epistemologies and various indigenous school materials.

Hanne Veber is an independent senior researcher affiliated with the University of Copenhagen Department of Cross-Cultural and Regional Studies, specializing in indigenous cultures and the history of colonization of North America and the Upper Amazon. She has worked with the Ashéninka of Peru’s Selva and published on Ashéninka social and political organization, intercultural relations, material culture, gender relations, indigeneity, and ethnography. She worked intensively with autobiographical stories for her edited volume Historias para nuestro futuro/Yotantsi ashí otsipaniki‘: Narraciones autobiográficas de líderes asháninkas e ashéninkas and co-authored a monograph on the Ashéninka of the Gran Pajonal for the Guía Etnográfica de la Alta Amazonía volume 5. Her other publications include special issues of academic journals, book chapters, and articles.