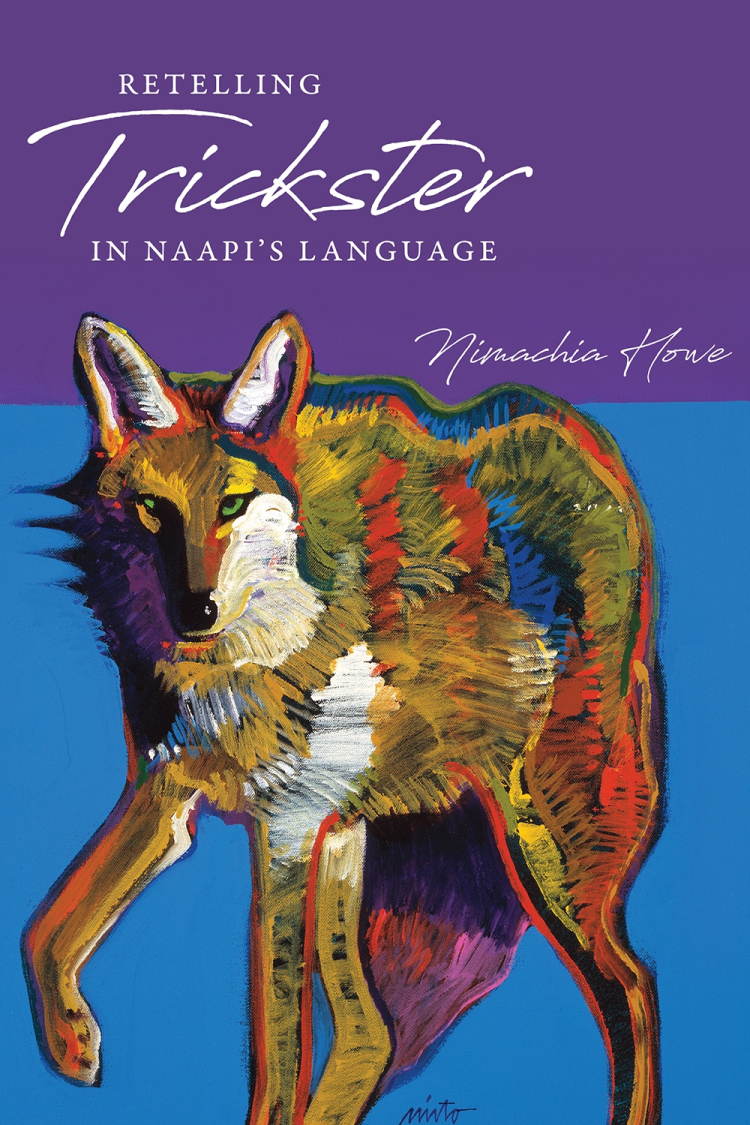 “Retelling Trickster in Naapi’s Language is a representation of Naapi and the stories in which he appears that more honestly and correctly reflects the Blackfoot understanding, and through these extended examples discussed in depth, substantially advances academic discourse on ‘trickster’ figures. . . . Compelling and convincing, and very much needed.”
—Alice Kehoe, professor emeritus of anthropology at Marquette University

“In this remarkable, challenging book, an intricate array of voices, some human and many more-than-human, find their way into the telling of Naapi stories, bringing new life into the understanding of what this complex figure means for the Blackfoot people. Not human, not animal, not God, Naapi is best understood as the expressive manifestation of a range of energies by which space and time become an architecture that others in turn can inhabit and flourish in.”
—James Hatley, Salisbury University

“A very impressive interdisciplinary analysis of the Blackfoot concept called Naapi. A must-read for Algonquin scholars.”
—Mary Eggermont-Molenaar, author of Blackfeet Tales and Teachings by John Tatsey and Montana 1911: A Professor and His Wife among the Blackfeet

“Perhaps the most important contribution made by Howe’s examination of Naapi from an Indigenous perspective is its reminder of the oversimplification and often error that arise from ignoring original languages and foundational concepts when attempting to appreciate a community’s verbal art only from an outside perspective...Students of Native North American traditions will definitely find this volume useful, but anyone involved in examinations of traditional narrative on an intercultural level should read it.”
—Journal of Folklore Research

Retelling Trickster in Naapi’s Language is an examination of Nitsitapiisinni (Blackfoot) origin stories about one of the most powerful and unpredictable of the early creators in Niitsitapii consciousness and chronology: Naapi. Through in-depth linguistic analysis, Nimachia Howe reinterprets the earliest references to Naapi, offering a more authentic understanding of his identity and of the meanings and functions of the stories in which he appears.

Naapi is commonly and inaccurately categorized by Western scholars as a trickster figure. Research on him is rife with misnomers and repeated misinterpretations, many resulting from untranslatable terms and concepts, comparisons with the binary tenets of “good” vs. “bad,” and efforts by Niitsitapii storytellers to protect the stories. The five stories included in their entirety in this volume present Naapi’s established models of reciprocity, connection, kinship, reincarnation, and offerings, shown in descriptions of, and predictions for, the balance between life and death, the rising and setting of planets, wind directions and forces, and the cyclical nature of animals, birds, plants, glaciers, and rivers.

Retelling Trickster in Naapi’s Language will be of interest to students and scholars of Native American studies, ethnography, folklore, environmental philosophy, and Indigenous language, literature, and religion.

Nimachia Howe is curator and archivist at the Museum of the Plains Indian in Montana. She is an Indigenous philosopher and educator who specializes in environmental philosophy and landscape literature. Her work has been published in numerous edited collections and journals.