The Marrow of Human Experience

by William A. Wilson, edited by Jill Terry Rudy 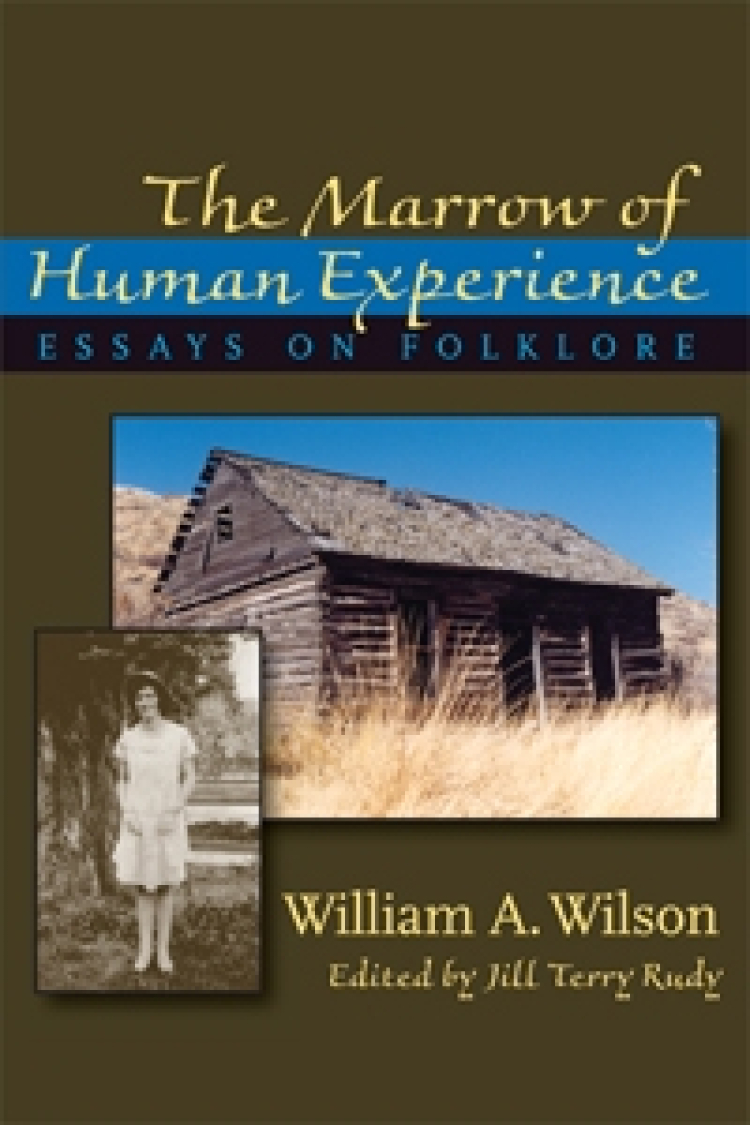 "Wilson is a marvelous storyteller and a fine writer. . . . His book Folklore and Nationalism in Modern Finland remains the best study of the use of folklore in nationalistic movements. . . . His articles on Mormon traditions evince the same intellectual rigor. Each is well written and insightful; all stand as the best that has been published on the subject."
—Michael Owen Jones

"How profoundly Wilson's 'Personal Narratives: The Family Novel' has influenced the discipline of folklore during the last decade and a half. In this one article I find again and again not just the underpinnings of an articulate theory of personal narrative but more importantly a complex matrix of theory and story woven together that beckons each reader to become part of the larger endeavor of 'listening to all the voices in our great land.'"
—Margaret K. Brady

Composed over several decades, the essays here are remarkably fresh and relevant. They offer instruction for the student just beginning the study of folklore as well as repeated value for the many established scholars who continue to wrestle with issues that Wilson has addressed. As his work has long offered insight on critical matters—nationalism, genre, belief, the relationship of folklore to other disciplines in the humanities and arts, the currency of legend, the significance of humor as a cultural expression, and so forth—so his recent writing, in its reflexive approach to narrative and storytelling, illuminates today's paradigms. Its notable autobiographical dimension, long an element of Wilson's work, employs family and local lore to draw conclusions of more universal significance. Another way to think of it is that newer folklorists are catching up with Wilson and what he has been about for some time.

As a body, Wilson's essays develop related topics and connected themes. This collection organizes them in three coherent parts. The first examines the importance of folklore. What it is and its value in various contexts. Part two, drawing especially on the experience of Finland, considers the role of folklore in national identity, including both how it helps define and sustain identity and the less savory ways it may be used for the sake of nationalistic ideology. Part three, based in large part on Wilson's extensive work in Mormon folklore, which is the most important in that area since that of Austin and Alta Fife, looks at religious cultural expressions and outsider perceptions of them and, again, at how identity is shaped, by religious belief, experience, and participation; by the stories about them; and by the many other expressive parts of life encountered daily in a culture. Each essay is introduced by a well-known folklorist who discusses the influence of Wilson's scholarship. These include Richard Bauman, Margaret Brady, Simon Bronner, Elliott Oring, Henry Glassie, David Hufford, Michael Owen Jones, and Beverly Stoeltje.

Reviews
The Journal of American Folklore, 2012, by Leonard Norman Primiano

The Association for Mormon Letters, 2007, by Jacqueline S. Thursby

William A. Wilson is professor emeritus of English at Brigham Young University. He served as president of the Association for Mormon Letters, as chair of the BYU English department, and as director of the BYU Folklore Archives. He has also served as editor of Western Folklore, on the executive board of the American Folklore Society, and as president of the Utah Folklore Society. He directs the Charles Redd Center for Western Studies at BYU and is former director of the Folklore Program at Utah State University, where he developed the annual Fife Folklore Conference.