An Essay for the English Profession on Potentiality and Singularity

by Janis Haswell and Richard Haswell 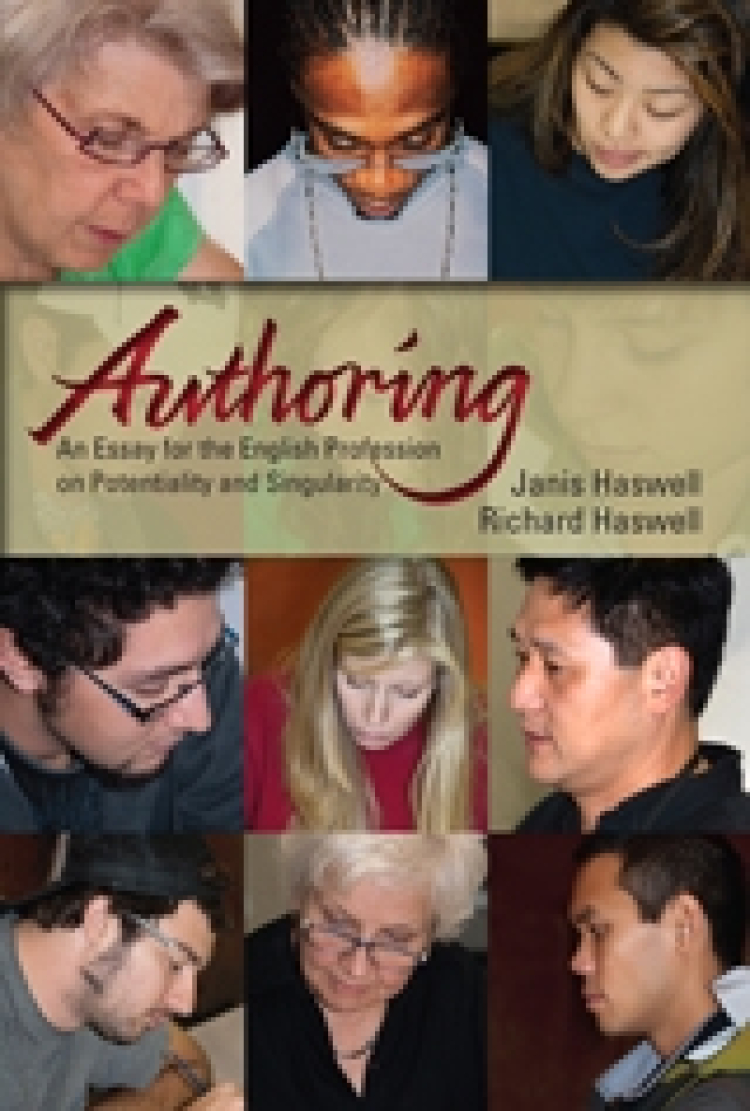 "This is a very smart monograph, and a provocative one, with a powerful essay quality as it weaves back and forth between composition and literature perspectives. Surely there will be contention—highly productive contention. But I was just delighted to be pushed around by this book."
—Christiane Donahue, Dartmouth

The postmodern conviction that meaning is indeterminate and self is an illusion, though fascinating and defensible in theory, leaves a number of scholarly and pedagogical questions unsatisfied. Authoring—the phenomenological act or felt sense of creating a text—is "a remarkably black box," say Haswell and Haswell, yet it should be one of the central preoccupations of scholars in English studies. Not only can the study of authoring accommodate the "social turn" since postmodernism, they argue, but it accommodates as well conceptions of, and the lived experience of, personal potentiality and singularity.

Without abandoning the value of postmodern perspectives, Haswell and Haswell use their own perspective of authorial potentiality and singularity to reconsider staple English-studies concerns such as gender, evaluation, voice, character, literacy, feminism, self, interpretation, assessment, signature, and taste. The essay is unique as well in the way that its authors embrace often competing realms of English studies, drawing examples and arguments equally from literary and compositionist research.

In the process, the Haswells have created a Big Idea book, and a critique of the field. Their point is clear: the singular person/mysterious-black-box/author merits deeper consideration than we have given it, and the book's crafted and woven explorations provide the intellectual tools to move beyond both political divisions and theoretical impasses.

Janis Haswell is professor emerita of English at Texas A&M University–Corpus Christi. She is the author and coauthor of five books: Introduction to the Raj Quartet (1985), Pressed against Divinity: W. B. Yeats and the Feminine Mask (1997), Paul Scott's Philosophy of Place(s): The Fiction of Relationality (2002), Authoring (2010), and Hospitality and Authoring (2015), as well as some thirty articles in both literature and composition.

Richard Haswell retired from Texas A&M University, Corpus Christi, in 2005. At Washington State University, he directed the composition program (1972–82) and the cross-campus writing-assessment program (1993–96). He is author of Gaining Ground in College Writing (1991), coauthor of Early Holistic Scoring of Writing (2019) with Norbert Elliot, Authoring (2010) and Hospitality and Authoring (2015) with Janis Haswell, and coeditor of Comp Tales (2000), Beyond Outcomes (2001), and Machine Scoring of Student Essays (2006). With colleague Glenn Blalock, he created CompPile, an online bibliography of scholarship in composition and rhetoric.

An Essay for the English Profession