The Cost of Becoming a Mother in Academia and to Academia

Last year, I attended a workshop for early career scientists focused on our polar regions, and the organizers did a splendid job at achieving gender diversity within the group of twenty-five or so of us participating. The setting (Catalina Island) was spectacular, the conversation was spirited and collegial. In one of our final days, however, the discussion became heated, precipitated by a question on who in the group had children or not.

Last year, I attended a workshop for early career scientists focused on our polar regions, and the organizers did a splendid job at achieving gender diversity within the group of twenty-five or so of us participating. The setting (Catalina Island) was spectacular, the conversation was spirited and collegial. In one of our final days, however, the discussion became heated, precipitated by a question on who in the group had children or not. The hands raised in response confirmed what everyone else had observed anecdotally throughout their careers: most of the men had children, while only one woman identified as a mother. The conversation quickly devolved into arguments regarding the merits of paternity leave, allowing men to spend time at home, get a class or two taken off his schedule, and often—as asserted by a few in the group—using that extra “free” time to publish, thus putting the fathers far and ahead of the mothers on the tenure and promotion track.

This sentiment was echoed in a recent New York Times article that highlights a study in which “[t]hey found that men who took parental leave used the extra year to publish their research, amassing impressive publication records. But there was no parallel rise in the output of female economists.” I read, I sighed, I wrung my hands, and then I was asked to write this blog based on this incredibly uninspiring tweet: 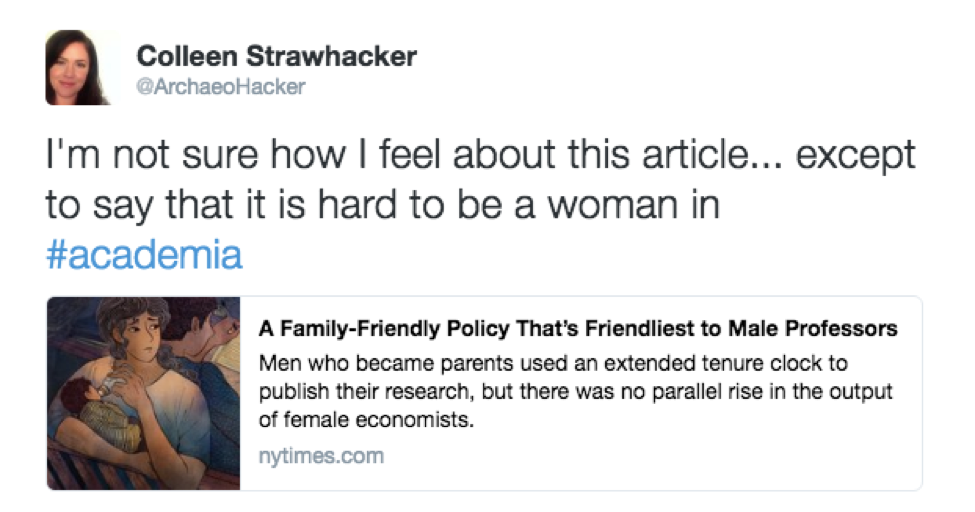 As the tweet suggests, I am not the most qualified person to write this post (I am not a mother, nor do I have any immediate plans to become one, in part because I know it will have an undesirable effect on my career), nor do I have a solution to the loss of women in academia as careers progress (due to motherhood or other factors). It makes me uneasy to demonize progressive policies—that is, paternity leave—that are designed to allow men to become more involved in the early development of their children’s lives and do not force women into the primary caregiver role. I also disliked the lack of context provided in the NYT article. As an archaeologist, I prefer my science to be a mix of the quantitative and qualitative: direct quantitative data to produce convincing data visualizations enriched with the qualitative context to fully understand what those concrete numbers are telling us. The NYT article is steeped in broad summary statistics, which can often be misleading (see here for a comic aside), and the qualitative is lacking, which is where this response comes into play, providing context to otherwise depressing numbers. Indeed, the response points to misleading summary statistics and provides examples and context where paternity leave absolutely benefits and supports the mother. So, no, don’t get rid of paternity leave just yet, but we are still losing women in academia at alarming rates.

What I do know is that having children comes at a higher cost to women (at the very least by biological imperative, via the trauma of childbirth and the time and energy involved in breastfeeding, should the mother choose to do so) and that many academic policies regarding tenure and their consequences (however unintended) affect those of us with and without children—consequences that I am reminded of on a daily basis as I observe women slowly dropping from the ranks around me, reminding me of a reality for many women remaining in academia that I tweeted earlier:

This is big problem for all of us in academia—parents or not—that there simply is not enough representation of women at all levels in academia (especially at the top) and that loss of diversity is catastrophic both to women (mothers or not) and to academia. I experience sexism often in my position, and one of my first lines of defense (and a key strategy for the maintenance of my mental health) is the support of other women who experience the same. Only, I am surrounded by fewer and fewer women as my career progresses, a trend partially driven as more female academics choose to become mothers with little support to continue progressing their careers while raising children. The bottom line is that despite progress made with gender-neutral policies supporting women to become mothers, that progress is still not enough to ensure women can remain competitive on the tenure and promotion scale while raising a family.

Colleen A. Strawhacker is a research scientist at the National Snow and Ice Data Center at the University of Colorado Boulder and coeditor of Movement, Connectivity, and Landscape Change in the Ancient Southwest.