Intersections in Environmental Justice publishes books for scholars and students that focus on environmental justice around the world. By inviting scholars from multidisciplinary perspectives—including but not limited to environmental, public, and Western histories; sociology; political science; communications; geography, Native and Indigenous studies; ethnic studies; women’s, gender, and sexuality studies; built environments; and ecology—the series explores the interrelated issues of race, gender, and inequity that impact citizens of the globe. Series titles cover land, food, agriculture, water, and climate justice issues and the way such issues are expressed in both urban and non-urban environments.

This series contributes to a growing conversation about the way in which community building creates an opportunity to create a better society, one that aims for food and water security, sovereignty of land, and generating bridges to connect individuals and organizations, the academy and activists, and citizens and policymakers to their local spaces, regions, and the planet.

All proposals for the this series should follow the press submission guidelines, and submission will be evaluated by the press acquisitions staff, the series editor and/or editorial board, as well as outside experts. 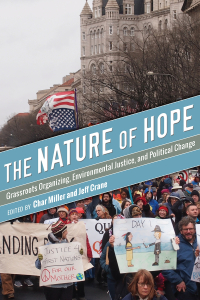 The Nature of Hope