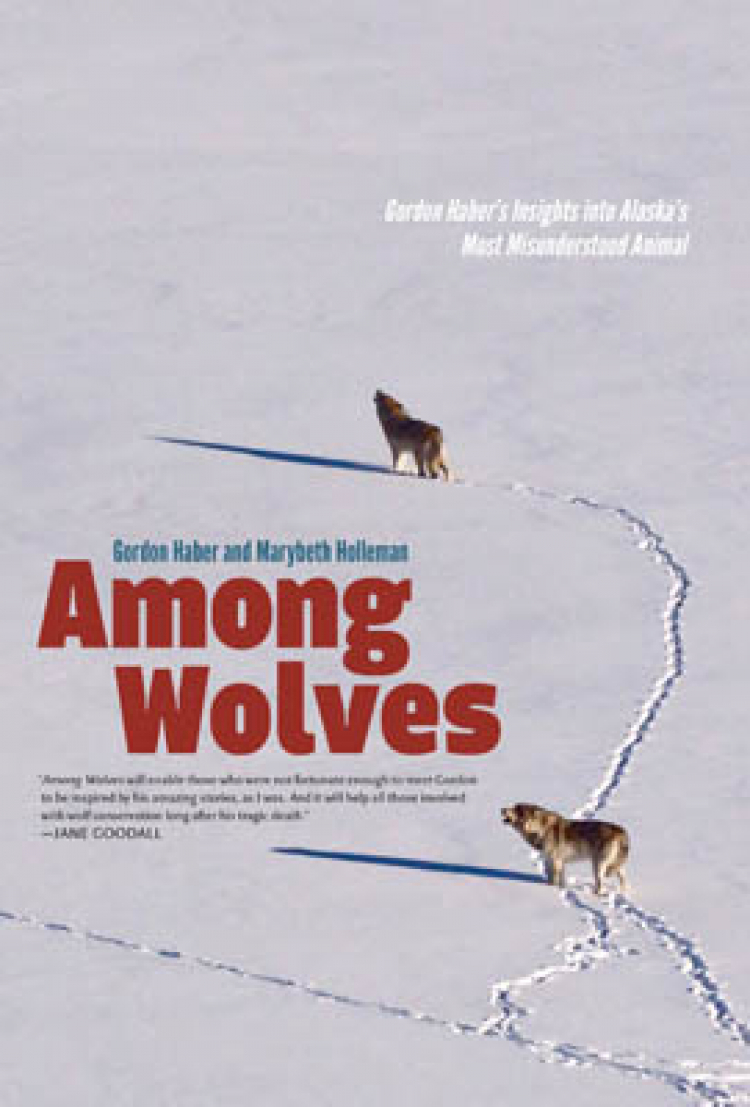 "Culled from [Haber's] published articles, research notes, and tweets, combined with the reminiscences of friends and colleagues, this volume, created by Alaskan writer Holleman, is the final word on the groundbreaking research Haber conducted on the Denali wolf packs for four decades."
—Booklist

"Among Wolves will enable those who were not fortunate enough to meet Gordon to be inspired by his amazing stories, as I was. And it will help all those involved with wolf conservation long after his tragic death."
—Jane Goodall

"Holleman closely followed Haber's work for about 30 years. . . it was his passion for his subject that she said kept her observing him, as closely as he observed the wolves of Denali."
—Alaska Dispatch

"This extraordinary collaboration between Alaska writer Marybeth Holleman and the late world-renowned wolf biologist Dr. Gordon Haber is informative, gripping, passionate, and revealing. It takes readers deep into the culture of Denali National Park's wolf family groups through Haber's 40-plus-years of exacting observations, and then deep into the mire of Alaska wolf politics."
—ISLE

"Holleman deserves credit for creating comprehensive introductory material and a well-organized book (gleaned from Haber’s journals and notes). Readers will share Haber’s intimate experiences with the Toklat wolves of Denali National Park and Preserve and those of the Yukon-Charley region of east-central Alaska. Reading Among Wolves gives us an appreciation not only for Haber’s subject but also for the man himself."
—Western American Literature

"Among Wolves is a rich addition to Canis lupus literature. It includes a great deal of new and intimate information on wolves. At the same time, this very readable book brings transparency to the figure of Gordon Haber, revealing to us, mostly through his own words, the intelligence and compassion of this remarkable man."
—Ecolit

Gordon Haber died when his research plane crashed in Denali National Park, and with his passing Alaska’s wolves lost their fiercest advocate. Passionate, tenacious, and occasionally brash, Haber devoted his life to Denali’s wolves. His writings and photographs reveal an astonishing degree of cooperation between wolf family members as they hunt, raise pups, and play. These social behaviors and traditions were previously unknown to the world, and the wolves were at risk of being destroyed by hunting and trapping. His studies of wolf families advocated for a balanced approach to wolf management, and his fieldwork registered as one of the longest studies in wildlife science, with a lasting impact on wolf policies.

Haber’s field notes, his extensive journals, and stories from friends all come together in Among Wolves to reveal much about both the wolves he studied and about the researcher himself. Wolves continue to fascinate and polarize people, and so Haber’s work will continue to resonate.

Marybeth Holleman, is author of The Heart of the Sound: An Alaskan Paradise Found and Nearly Lost. Her award-winning essays, poetry, and articles have appeared in such journals, magazines, and anthologies, as The North American Review, Orion, The Christian Science Monitor, Ice-Floe, Sierra, National Wildlife, Going Alone, American Nature Writing, Under Northern Lights, Solo, and The Seacoast Reader. Her radio commentaries have aired on National Public Radio. She is also author of Alaska’s Prince William Sound: A Traveler’s Guide and The State of the Sound, and teaches creative writing and women’s studies at the University of Alaska Anchorage. She holds a degree in Environmental Studies from the University of North Carolina Chapel Hill and an M.F.A. in Creative Writing from the University of Alaska Anchorage. Raised in the Appalachian mountains of North Carolina, she transplanted to Alaska nearly 20 years ago. She lives in the foothills of the Chugach Mountains with her husband and son.