Steaming to the North

The First Summer Cruise of the US Revenue Cutter Bear, Alaska and Siberia, 1886 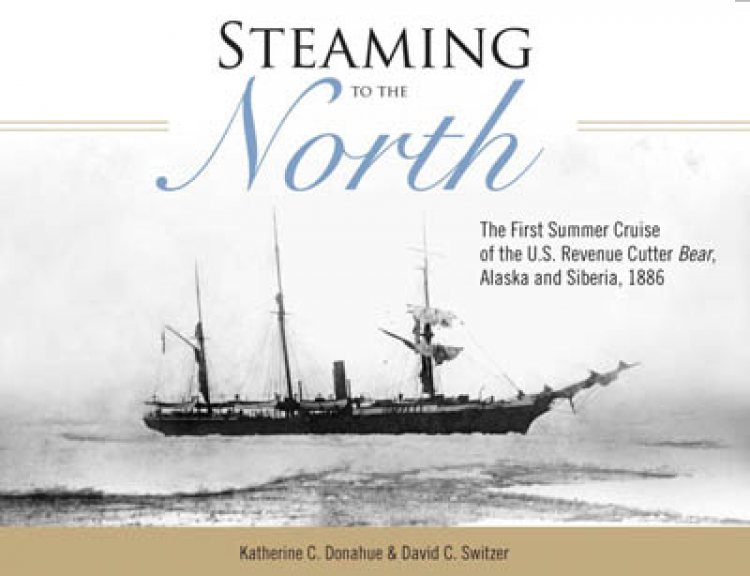 "The authors recount scenes of Native life and trading fairs, commercial whaling under sail and steam, traditional dress and hunting tools in the years just before the Nome gold rush changed life on Alaska’s north and west coasts forever. Profiles of the testy captain, Michael Healy, and his chief officers are included along with many full-page photos taken during the trip. These photos, beautifully restored where necessary and captioned as well as possible, are a real highlight."
—Alaska Dispatch

"In 1886 Alaska had been American for less than two decades, Russian presence had waned, and the whaling industry widely occupied the region. The sole representative of American authority in those waters was the US Revenue Cutter Bear, a 198-foot, reinforced-hull vessel powered by both steam and sail. . . . As Steaming to the North, shows, the Bear’s cruise that summer also produced some of the first photographs ever taken of that part of the world. Arranged into a narrative and explained with the help of the authors’ far-ranging research, the photographs—rediscovered in the 1970s under a porch in New Hampshire—chronicle the Bear’s journey from San Francisco to Alaska and Siberia, and give us a rare glimpse of a remote place and time."
—The New York Review of Books

"An impressive work of original and collaborative research, Steaming to the North is a fascinating maritime history enhanced with the inclusion of a six-page list of references and a seventy-nine page index. Exceptionally well written, organized, and presented."
—Midwest Book Review

"Fascinating, sometimes haunting. These are people of a not-so-distant time looking at us through the lens and saying, ‘This is how it was.’"
—David A. James, Alaska Dispatch News

"Through photographs of the Bear’s first Arctic cruise that were found under a porch in New Hampshire, Katherine Donahue and the late David Switzer . . . have treated readers to a rare but important visual account of a nineteenth-century cutter’s cruise."
—Alaska History

"Steaming to the North is more than just an illustrated chronology. Each chapter weaves a portion of a larger picture of the history that was unfolding during these remarkable years as whalers in great numbers began appearing in dangerous icy waters, decimating the huge walrus and whale populations of the Bering and Chukchi Seas; as Alaskan and Siberian Native encountered massive and largely unregulated European influence from shore- and sea-based agents; and as the thin arm of the US Government struggled to maintain a semblance of order in an otherwise lawless territory."
—International Journal of Maritime History

In a rugged frontier where the ocean was king, most laws came from those who ruled the sea—and few ships policed the western Arctic like the Revenue Cutter Bear. Commissioned into the organization that would eventually become the U.S. Coast Guard, the Bear patrolled and charted the waters of Alaska and Siberia, bringing medical care, saving lives, and dealing out justice when needed. The ship’s crew and famous captain, the fiery Michael Healy, looked out for Natives and Americans alike in a time when Alaska was adjusting to its new status as a U.S. territory.

Steaming to the North follows the Bear from May to October 1886 as it takes its first summer cruise from San Francisco up to Point Barrow and back again. This is the first book to exhibit the photographs taken by 3rd Lt. Charles Kennedy of New Bedford, introducing rarely seen photos of the last sail-and-steam whaling ships, capturing early interactions of Natives with white whalemen and explorers, and showing lives otherwise lost to time. Essays follow the logbook of the cruise and allow readers to vividly ride alongside the crew in a history-making voyage.

David C. Switzer (1934–2012) was emeritus professor of history at Plymouth State University and coauthor of Underwater Dig: The Excavation of a Revolutionary War Privateer and Snow Squall: The Last American Clipper Ship.

The Alaska Native Brotherhood and the Struggle for Indigenous Rights