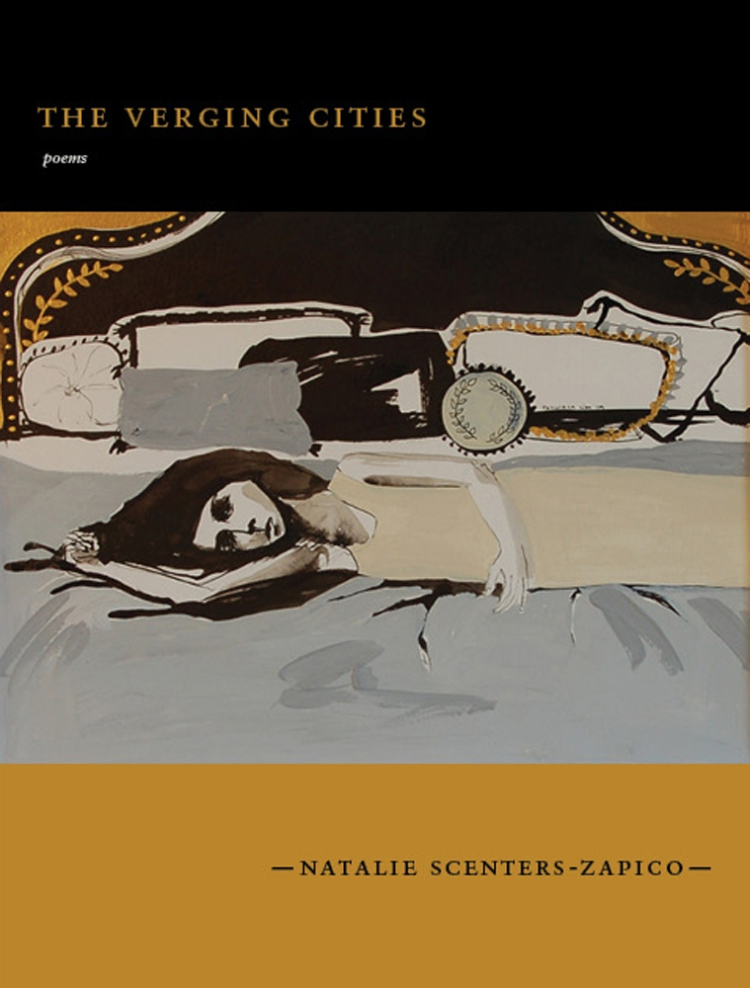 “Natalie Scenters-Zapico engages politically and personally charged material here with signature intimacy and fairy-tale strangeness. . . . There’s often a sense of blood thirst and blood magic . . . a sense that chthonic forces thrum under every border encounter and experience, where violence is ‘greeted with extreme desire.’ The poems and the poet ask, ‘What can art do in the face of such brutality and death?’ It’s a question that threads through all of Scenters-Zapico’s work. Propelled by love and horror, Scenters-Zapico writes a rich, dark poetry of witness: ‘Some say, you have no right to talk about the dead. / So I talk about them as living, their bodies standing in the street’s bend.’”
—Dana Levin

"From the Kentucky Club to the Border Patrol, from murder to marriage to Lotería, Natalie Scenters-Zapico’s debut collection is a lush love poem to life along the border, in the ‘verging cities’ of El Paso and Cd. Juarez. Fiercely original, these poems detail life along the border and beyond with a lover’s intimate gaze. While the book ‘sings of murder, all wildness’ it also catalogues beauty in the ordinary and in the unexpected from Antiques Roadshow to the border fence that the dead help collapse ‘link by link.’ Wildly imagistic and political in the best way, this book challenges stereotypes of the border, and is a stunning contribution to literature of the Americas.”
—Lisa D. Chávez

“‘Travelers think there’s nothing in the desert,’ writes poet Natalie Scenters-Zapico in this debut collection, an obsessive examination of the seams and scars of borders. Writing about both US/Mexico and marriage, Scenters-Zapico crafts poems driven by visceral images of mass graves, maquilas, heatwaves, sex, and bullfights. The risks and intelligence of this book are stunning, and I can’t wait to see what she does next.”
—Carmen Giménez Smith

"Not for the faint of heart, Scenters-Zapico guides us through dive bars and corpse-ridden gullies, along thirst-inducing border fences, and into bureaucratic hell. . . . The Verging Cities pulls no punches, yet it is also tender and intelligent."

"[I]t is difficult to find a voice discerning and trustworthy enough to share its stories with the scope and passion [with which] Natalie Scenters-Zapico faces the subject in The Verging Cities. . . . The Verging Cities doesn’t rely on the sentimentalism of liberal immigrant narratives or commercials designed to garner donations; it doesn’t feel like a movie. Reading the book doesn’t make me feel better. It makes me weep with anger and frustration. It opens the wounds people try to ignore. It calls the ambulance."

​"​Natalie Scenters-Zapico is an important emerging poet whose formal and tonal range in The Verging Cities is impressive and disarming. Her voice is honest, engaging, and complex as she explores the liminal space of the U.S./Mexico border with vivid imagery that moves fluidly between Juárez and El Paso. At times both tender and funny, she writes so that the border becomes not just an idea, but a rich and real world. With poems that are as intelligent as they are urgent, Natalie Scenters-Zapico offers a necessary poetic voice in these perilous times.​"​

From undocumented men named Angel, to angels falling from the sky, Natalie Scenters-Zapico’s gripping debut collection, The Verging Cities, is filled with explorations of immigration and marriage, narco-violence and femicide, and angels in the domestic sphere. Deeply rooted along the US-México border in the sister cities of El Paso, Texas, and Cd. Juárez, Chihuahua, these poems give a brave new voice to the ways in which international politics affect the individual. Composed in a variety of forms, from sonnet and epithalamium to endnotes and field notes, each poem distills violent stories of narcos, undocumented immigrants, border patrol agents, and the people who fall in love with each other and their traumas.

The border in Scenters-Zapico’s The Verging Cities exists in a visceral place where the real is (sur)real. In these poems mouths speak suspended from ceilings, numbered metal poles mark the border and lovers’ spines, and cities scream to each other at night through fences that “ooze only silt.” This bold new vision of border life between what has been named the safest city in the United States and the murder capital of the world is in deep conversation with other border poets—Benjamin Alire Saenz, Gloria Anzaldúa, Alberto Ríos, and Luis Alberto Urrea—while establishing itself as a new and haunting interpretation of the border as a verge, the beginning of one thing and the end of another in constant cycle.

Natalie Scenters-Zapico is from the sister cities of El Paso, Texas, United States, and Cd. Juárez, Chihuahua, Mexico. Her poems have appeared in journals including The Believer, American Poets, Prairie Schooner, West Branch, and Palabra. She currently lives in Salt Lake City with her husband, José Angel Maldonado.