The History of the Death Penalty in Colorado 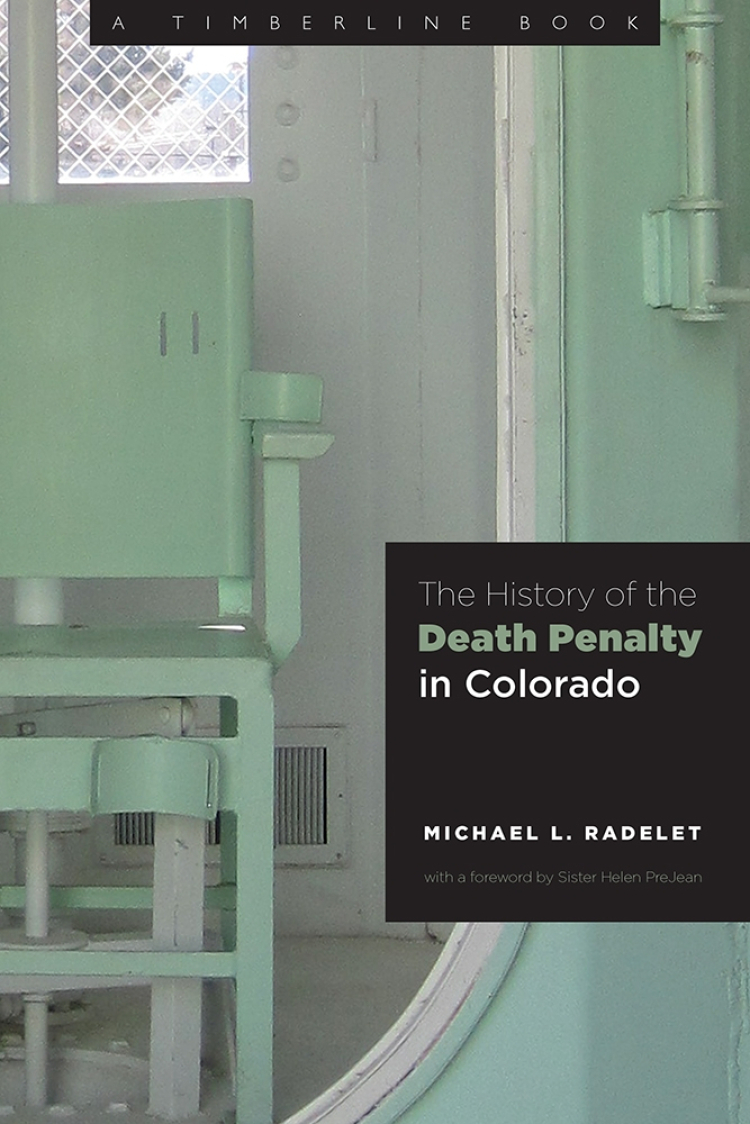 "Professor Radelet's comprehensive review of Colorado's experience with the death penalty exposes the state's long history of struggle with the fairness and equity of this aspect of our criminal justice system. Professor Radelet reminds us we are not unique in asking whether our 'experiment with the death penalty' has worked: we have asked this question since our territorial days. The History of the Death Penalty is an insightful examination of the death penalty and whether it has a place in our state. It is a critical resource for students of history and justice alike."

"Written by one of the most distinguished death penalty scholars in the world today, The History of the Death Penalty in Colorado is a comprehensive and engaging resource for students, attorneys, legislators, and anyone considering the pros and cons of the death penalty, both in Colorado and on a national scale. The book will be of interest to readers far beyond Colorado’s borders for many years to come."
—Elizabeth A. Zitrin JD, President, World Coalition Against the Death Penalty

“The History of the Death Penalty in Colorado provides a model of what is needed in every state to preserve the historical record of our fights over executions. It’s my personal hope that Colorado will soon end the death penalty, thus making the story of its ultimate abolition the only supplement this book ever needs."
—Mike Farrell, human rights activist and actor (M*A*S*H)

"Michael Radelet is the rare researcher and scholar who has lived with the topics and issues he writes about. His insight and scholarship about the death penalty is sharp, clear, and informed by a deep knowledge about the lives of condemned people and the systems that create state sanctioned killing. No understanding of the death penalty is complete without a thorough reading of his work."
—Bryan Stevenson, Equal Justice Initiative and author of Just Mercy

"Michael Radelet’s meticulous research and insight are critical to our understanding of capital punishment. For over three decades Professor Radelet has been a leader in an area rife with political posturing and judicial interventions. No scholar has done a better job of exploring and navigating the pitfalls of the death penalty at the state, national, and international level."
—Douglas K. Wilson, Colorado Public Defender

"A compelling account of a key issue in Colorado history and an important service to the state of Colorado."

"Radelet’s meticulously researched study of Colorado’s death penalty should be of considerable interest not just to state residents but to anyone concerned about the United States’ ultimate sanction. . . .  To understand capital punishment’s fatal flaws, look westward to Colorado—and to an expert, adept tour guide, Professor Radelet."

"It is a daunting task to blend morality with history, yet the author, Michael Radelet, while not a philosopher, does an excellent job of blending philosophical issues within producing the unique history the death penalty has in Colorado. . . this book ought to be read by all persons who take the time to consider the morality of the death penalty in America."
—Colorado Book Review

In The History of the Death Penalty in Colorado, noted death penalty scholar Michael Radelet chronicles the details of each capital punishment trial and execution that has taken place in Colorado since 1859. The book describes the debates and struggles that Coloradans have had over the use of the death penalty, placing the cases of the 103 men whose sentences were carried out and 100 more who were never executed into the context of a gradual worldwide trend away from this form of punishment.

For more than 150 years, Coloradans have been deeply divided about the death penalty, with regular questions about whether it should be expanded, restricted, or eliminated. It has twice been abolished, but both times state lawmakers reinstated the contentious punitive measure. Prison administrators have contributed to this debate, with some refusing to participate in executions and some lending their voices to abolition efforts. Colorado has also had a rich history of experimenting with execution methods, first hanging prisoners in public and then, starting in 1890, using the "twitch-up gallows" for four decades. In 1933, Colorado began using a gas chamber and eventually moved to lethal injection in the 1990s.

Based on meticulous archival research in official state archives, library records, and multimedia sources, The History of the Death Penalty in Colorado will inform the conversation on both sides of the issue anywhere the future of the death penalty is under debate.

Michael L. Radelet is professor in the Department of Sociology at the University of Colorado Boulder and faculty affiliate in CU’s Institute of Behavioral Science. For the past thirty-five years his research has focused on capital punishment, especially the problems of erroneous convictions, racial bias, and ethical issues faced by medical personnel who are involved in capital cases and executions. He has testified in approximately seventy-five death penalty cases, before committees of both the US Senate and House of Representatives, and in legislatures in seven states and has worked with scores of death row inmates as well as families of homicide victims. In 2011 he received a Distinguished Alumni Award from Purdue and the William Chambliss Award for Lifetime Achievements in Law and Society from the Society for the Study of Social Problems, and in 2012 he received one of three campus-wide awards for distinguished research from the Boulder Faculty Assembly.