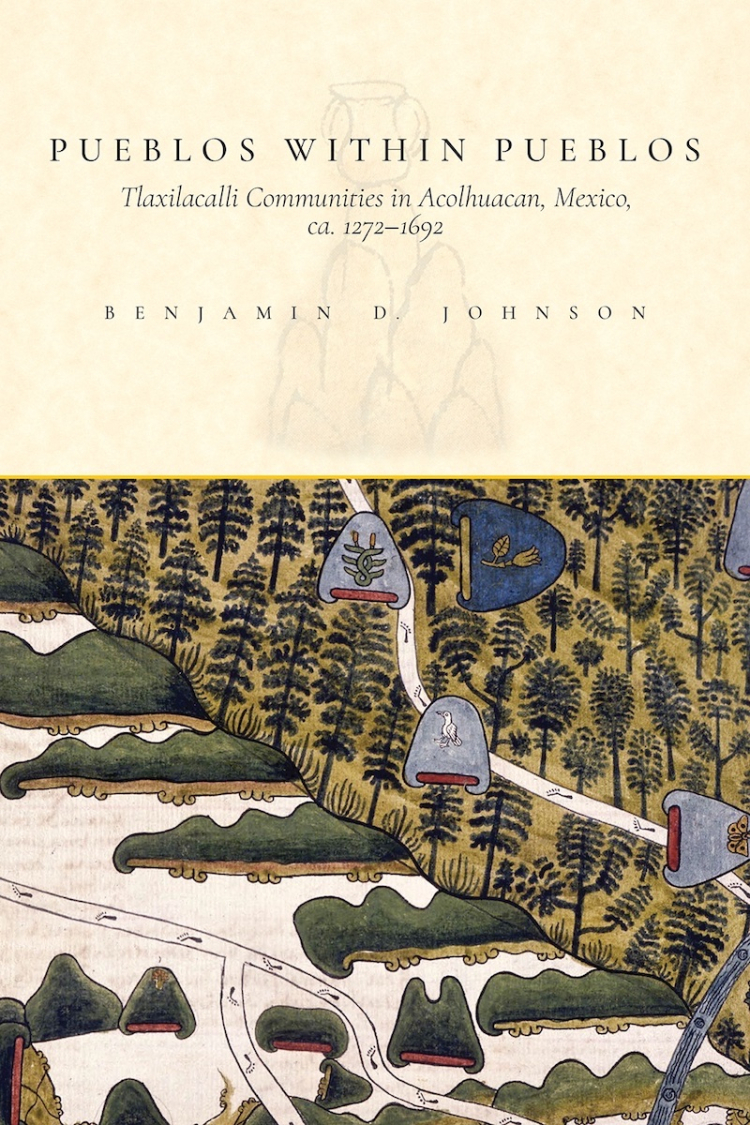 "Meticulously researched, this important book burrows under traditional temporal and political boundaries in the premodern history of central Mexico to uncover the basis for indigenous social resilience over time. With Pueblos within Pueblos, Benjamin Johnson has given us a rich portrait of how tributary communities underpinned the social, spatial, symbolic, and material functioning of Amerindian empires and how they persisted through their turmoils and collapse to emerge as key sites of articulation of Spanish rule at the local level."

“With this book the tlaxilacalli takes center stage and asserts itself as vibrant, flexible, and resilient. Pueblos within Pueblos breaks chronological and disciplinary boundaries and renders a fascinating story of the communities and the common people who made them in a key area of central Mexico.”
—Caterina Luigia Pizzigoni, Columbia University

“This book is a beacon reminding researchers to understand and appreciate, through indigenous categories, the everyday realities, practicalities, choices, and struggles of the people who produced the works they study.”
—Hispanic American Historical Review

"This interesting and thought-provoking scholarly work is full of abundant notes that will benefit others wishing to pursue this line of research. Pueblos within Pueblos demonstrates the value of integrating local-level institutions into studies that deal with broader levels of political life."
—Journal of Anthropological Research

"Johnson tells us 'a root-level history of autonomy' that is indeed essential for challenging more conservative historiographies presented from the point of view of the center or its centralized power. It brings to the surface a crucial group, very often neglected, underrepresented, or entirely absent in typical historical discourses—the commoners."
—Latin American Research Review

Focusing on the specific case of Acolhuacan in the eastern Basin of Mexico, Pueblos within Pueblos is the first book to systematically analyze tlaxilacalli history over nearly four centuries, beginning with their rise at the dawn of the Aztec empire through their transformation into the “pueblos” of mid-colonial New Spain. Even before the rise of the Aztecs, commoners in pre-Hispanic central Mexico set the groundwork for a new style of imperial expansion. Breaking free of earlier centralizing patterns of settlement, they spread out across onetime hinterlands and founded new and surprisingly autonomous local communities called, almost interchangeably, tlaxilacalli or calpolli.

Tlaxilacalli were commoner-administered communities that coevolved with the Acolhua empire and structured its articulation and basic functioning. They later formed the administrative backbone of both the Aztec and Spanish empires in northern Mesoamerica and often grew into full and functioning existence before their affiliated altepetl, or sovereign local polities. Tlaxilacalli resembled other central Mexican communities but expressed a local Acolhua administrative culture in their exacting patterns of hierarchy. As semiautonomous units, they could rearrange according to geopolitical shifts and even catalyze changes, as during the rapid additive growth of both the Aztec Triple Alliance and Hispanic New Spain. They were more successful than almost any other central Mexican institution in metabolizing external disruptions (new gods, new economies, demographic emergencies), and they fostered a surprising level of local allegiance, despite their structural inequality. Indeed, by 1692 they were declaring their local administrative independence from the once-sovereign altepetl. Administration through community, and community through administration—this was the primal two-step of the long-lived Acolhua tlaxilacalli, at once colonial and colonialist.

Pueblos within Pueblos examines a woefully neglected aspect of pre-Hispanic and early colonial Mexican historiography and is the first book to fully demonstrate the structuring role tlaxilacalli played in regional and imperial politics in central Mexico. It will be of interest to students and scholars of Latin American ethnohistory, history, and anthropology.

Benjamin D. Johnson is assistant professor of history at the University of Massachusetts Boston, where he teaches the history of the pre-Columbian Americas, Latin American and world history, comparative colonialisms, and historical methods.