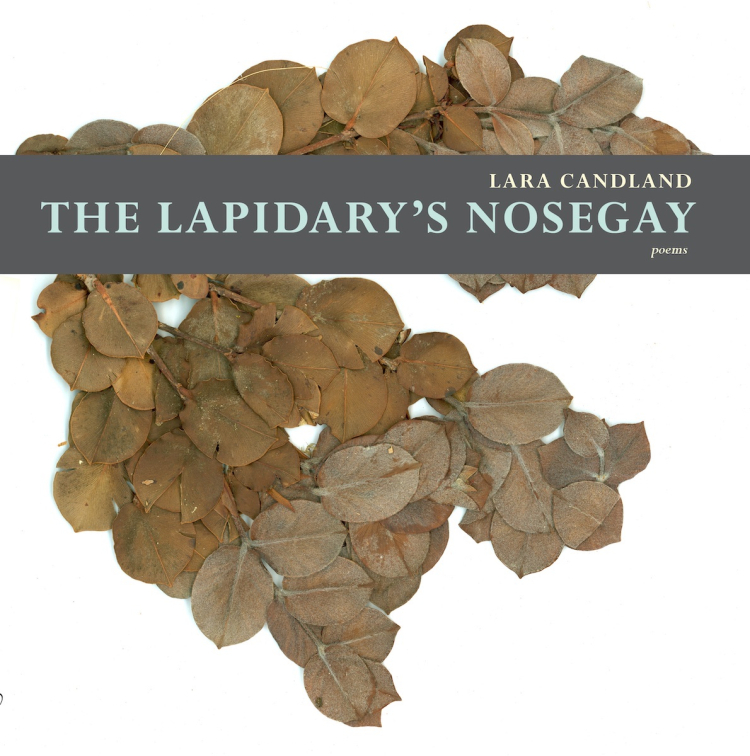 “Lara Candland’s The Lapidary’s Nosegay opens a most interior ‘castle’ that reminds me of St. Teresa of Avila. Candland evokes a ghostsouled world where we enter a sacred and deeply feminine space. We pass and sit with prophets, Isaiah, Samuel, the Poetess Queen, Belle of Amherst among them. In this mind-scape, ‘..........four seasons we ((gh(o)sts)) sit’ as ‘Calvin’s heretical’ daughters, and ghost daughters continue to cut truth with an ‘(((amythyst knife))).’ Pearls are worn secretly, concealed ‘over the breast,’ and pearls are secretly stitched into ‘temple bonnet[s]’; we are intimacy in caution where ‘queer’ lovers climb out windows. Both Dickinson’s and Candland’s own religious exploration and ultimate rebellion continue to celebrate ‘pr(o)fessing the herbarium ’s gospel.’ We may be ‘out-fashioned’ here, but we are never ‘outvisioned.’ We are ‘piecing gods quilt,’ and though women will not write on ‘golden tablets’ the Queen’s gems are ‘inscribed int(o) (((god’s))) granite.’”
—J. L. Jacobs

“This—what to call it: collaboration? appropriation? ravishment? devotion? with, to, and of ‘(((Our Daylily P(o)etess))),’ Emily Dickinson—is like nothing else I’ve read, except perhaps Dickinson’s own work. Lara Candland takes on not only Dickinson’s exquisite vocabulary,
her eccentric array of poetic touchstones (bee, gentian, amethyst, diadem, cochineal), but her plummet and rise—in virtually the same breath—to abject humility, then breathtaking daring. The Lapidary’s Nosegay is both nineteenth century and post post-modern, and, like the work of its daunting muse, a heady mix of balm and minefield, always exhilarating, sometimes soothing, sometimes threatening explosion.”
—Jacqueline Osherow

The Lapidary’s Nosegay, Lara Candland’s primer of poems, presents to readers a bouquet of resplendent poems that Candland has created, collaged, curated, and reimagined by using the rich floral and gem imagery in the poetry of Emily Dickinson as her primary source material. Dickinson and Candland share linguistic and theological roots in the Bible, nineteenth-century American Protestantism, and a lexicon distinctive to their specific individuarian communities, and this collection of poems draws a serpentine kind of map across nearly two centuries, journeying from Amherst, Massachusetts, to Provo, Utah, from Dickinson’s severe and lush New England to Candland’s own jagged, harsh, and stunning high desert Utah. The Lapidary’s Nosegay explores the ways that both poets have simultaneously challenged and embraced the axiomatic constraints of religion, landscape, and cultural conventions and expectations of each poet’s time and place.

Aesthetically, Candland attempts to challenge the hierarchies of the page through linguistic, typographic, and sonic experimentation. The Lapidary’s Nosegay carries Dickinsonian echoes to alliterative and parenthetic excessivities that indicate sound stresses or that pictographically invoke sun, god, ghosts, ecstasy, and the jewels and flowers tumbling throughout Dickinson’s own poems. This collection works at toppling textual hierarchies, systematically jumbling sound, text, meaning, symbol, and context and entering the vein of radical American aesthetics, politics, and culture that have shaped Candland’s life and poetics.

Lara Candland is a poet, musician, singer, and co-founder of and chief-librettist for the Seattle Experimental Opera. Her work has appeared in Fence, Colorado Review, the Crab Creek Review, the Likewise Folio, Barrow Street, and many other journals. Her first book, Alburnum of the Green and Living Tree, was published in 2010, and her performance with Lalage—poetry and live electronic looping and manipulations—appears on the CD Lalage: Live on Sornarchy. Her opera Sunset with Pink Pastoral was a finalist in the Genesis Prizes for New Opera and was presented at Sadler’s Wells Theatre in London as well as in performances in Seattle, Washington; Vancouver, BC; and Salt Lake City, Utah.