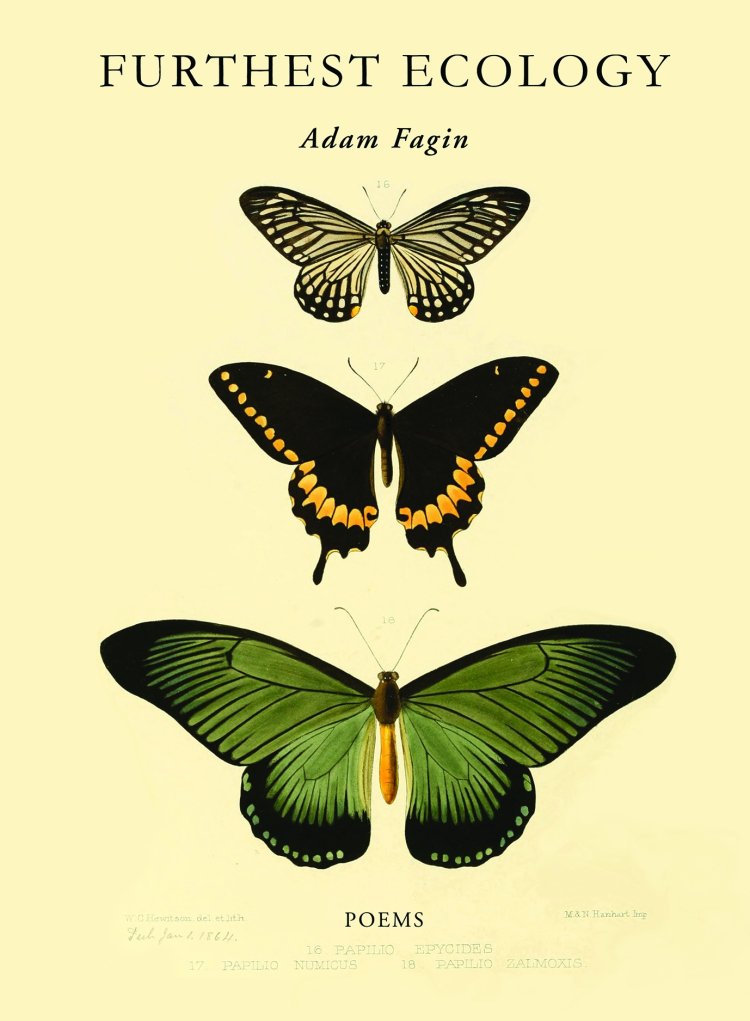 "To read Furthest Ecology is to be given the opportunity to immerse ourselves in a work that can offer immediate value to all of us who realize we are always choosing, in our own lives, what insights we will allow ourselves to see, even if those insights may shake or even shatter the foundations of our fixed identities.”
—Rusty Morrison

“Adam Fagin’s gloriously capacious and irreverently intelligent first book is the prosodic record of an archival investigation into the work of Abbott Thayer, a late nineteenth-century American painter and naturalist. Tender, dry, funny, detailed instruments, his poems serially enlarge a perceptual field that risks the caesura of inwardness as one expression of politics. This debut quietly places Fagin among antecedents such as Susan Howe, Paul Celan, Etel Adnan—poets who, by situating the lyric query in philosophical necessity, open new descriptions of the ways history speaks in and to the present.”
—Lisa Robertson

Furthest Ecology takes up the life and labor of Abbott Thayer, the prickly, irrepressible American painter and naturalist nicknamed “the father of camouflage.” In 1896, Thayer discovered countershading, also known as “Thayer’s Law,” the theory of animal coloration often credited for laying the groundwork for military camouflage in World War I. Fagin’s poetry follows Thayer through “pure leafy space” ringing with “hypertelic / rhythms of a redpoll,” examining in lush, panoramic detail “the clairvoyance of the artist’s attention.” But this idyllic portrait unravels as Thayer’s story proceeds. Grieving the death of his first wife and, later, cutting a frenzied path through wartime Europe, Thayer encounters darker forces, within and without. With spare beauty and sharp-edged syntax, Fagin conjures the painter’s world: Loss, despair, obsession, ecstasy, and the aesthetic sublime. Furthest Ecology is a vivid and powerful debut that will haunt readers with its singular vision of artistic pursuit.

Adam Fagin is the author of two poetry chapbooks, T’s Alphabet and The Sky Is a Howling Wilderness But It Can’t Howl with Heaven. His work has appeared in Boston Review, Web Conjunctions, Denver Quarterly, and many other journals. He is a founding editor of Textsound, an online audio journal of poetry and sound art.