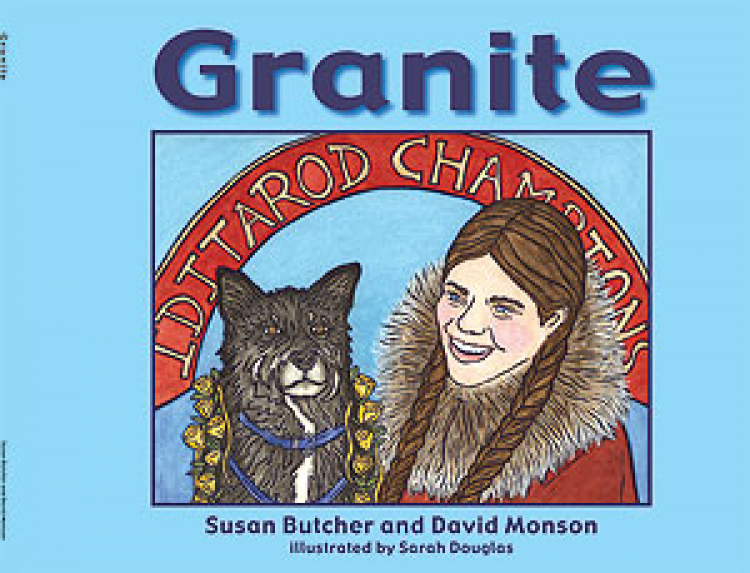 Susan Butcher was a four-time champion of the Iditarod Trail sled dog race. Granite was her greatest lead dog, but he didn’t start that way. He was a shy, scraggly pup that the others pushed around, but Susan saw his potential. Together they worked until he became leader of the team.

While they were training for the Iditarod, Granite became deathly ill. The veterinarians said he would never be strong enough to run the race. Granite refused to accept this, and slowly he started to recover. By the time of the race he was strong enough to start, but Susan wondered if he could finish the entire thousand-mile race. Confidently Granite guided the team into the lead of the race, when suddenly they were caught in a raging Arctic blizzard. Now Susan and the whole team depended on Granite to get them through the storm. He had to call on all his inner strength and courage to save them—if he could.

Susan Butcher and David Monson were married for twenty-one years. Together, they raised and trained the dogs of Trail Breaker Kennel and achieved many victories in major sled dog races around the world. Susan won the Iditarod four times and finished in the top ten fifteen times. Granite was her lead dog for many of these races. She took a dog team to the summit of Denali, the highest peak in North America—this feat has never been repeated. David won the Yukon Quest in 1988, and he and Susan ran the Iditarod together three times.

In August 2006, Susan died of leukemia. David lives in Fairbanks, Alaska, with their daughters, Tekla and Chisana. The three of them continue Susan’s legacy of raising and training sled dogs, many of which are descendants of Granite.

Sarah Douglas moved to Alaska in 1989 to work as a river guide and instantly felt that she had found her true home. She has been exploring the Great Land by kayak, dogsled, skis, and on foot ever since. The mountains, rivers, people, wild creatures, and open spaces of the north provide endless inspiration for her artwork. Sarah makes hand-colored linoleum block prints that she hopes convey joy, timelessness, simplicity and peace. To learn more about Sarah and her artwork, visit Sarah's website.