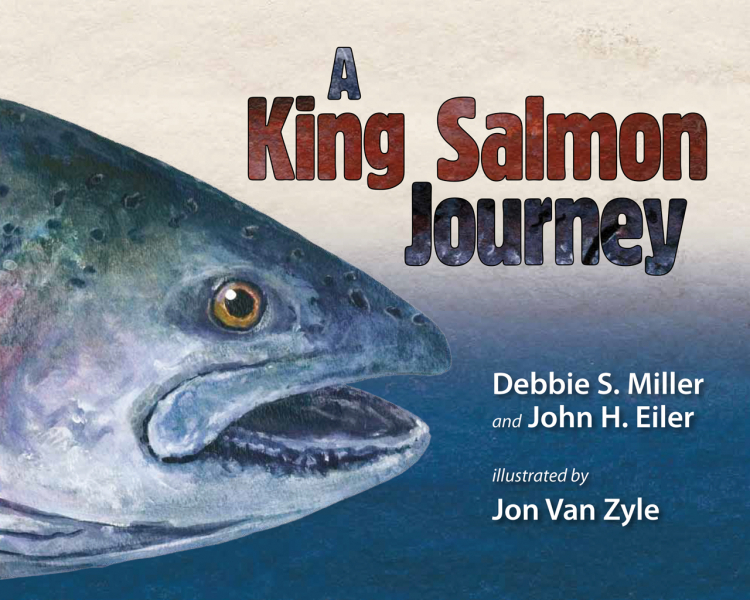 "Authors Debbie Miller and John Eiler, and illustrator Jon Van Zyle, trace the incredible true story of one particular salmon, which they appropriately name Chinook. They know this individual animal's story because she was one of about 3,000 fish that Eiler, a noted salmon biologist, gently captured as it returned to the Yukon River to begin its long swim to the spawning grounds. . . . Miller and Eiler have combined their insights into a graceful book that, while perhaps aimed at a younger audience, resonated with this adult reader as graceful, engaging and informative."
—Northern Passages Blog

"Follows a salmon named Chinook as she makes her way from the Bering Sea up the Yukon to her spawning ground on the Nisutlin River in Canada. Along the way she passes villages, numerous tributaries and other wildlife, avoiding fish wheels, bears and wrong turns. . . . It contains a wealth of information on salmon. . . with people, obstacles (both natural and man-made), other critters, maps and more passing through the pages."
—Alaska Dispatch News

"Their arduous migrations across the open sea, their return to spawn in the freshwater streams of their own birth: Salmon are among the most fascinating fish. Miller and Eiler follow one salmon on her trek, offering thought-provoking glimpses of both the fish’s biology and its important place in the cultures of Alaska and northwestern Canada."
—New York Times Book Review

"Through descriptive text, simple maps, and side boxes of data, Miller and Eiler tell the tale of this salmon, referred to as Chinook, clearly explaining the behavior, physical characteristics, and habits of this species."
—School Library Journal

Two thousand miles is a staggering distance for any kind of journey. But imagine making it not by car or even foot—but by fin. That’s what faces Chinook, a female king salmon, as she takes a dramatic trip to safely deliver her eggs. From the Bering Sea, up the Yukon River, and on to the Nisutlin River, A King Salmon Journey takes young readers on an engaging ride through the waters of Alaska and Canada, bringing to life the biology—and mystery—of one of the world’s most popular fish. Based on the story of a real-life chinook, this beautifully illustrated book deftly combines science with a fast-paced tale of survival and perseverance.

Debbie S. Miller is the author of dozens of books for children and adults, including A Caribou Journey, A Woolly Mammoth Journey, A King Salmon Journey, and Flight of the Golden Plover. She lives near Fairbanks, Alaska.

John H. Eiler has worked for more than thirty years as a research biologist with the National Marine Fisheries Service in Alaska. He lives in Juneau, Alaska.

Jon Van Zyle is recognized throughout the U.S. for his striking paintings of Alaska’s wildlife and landscape. He lives near Eagle River, Alaska. Flight of the Golden Plover

The Amazing Migration Between Hawaii and Alaska