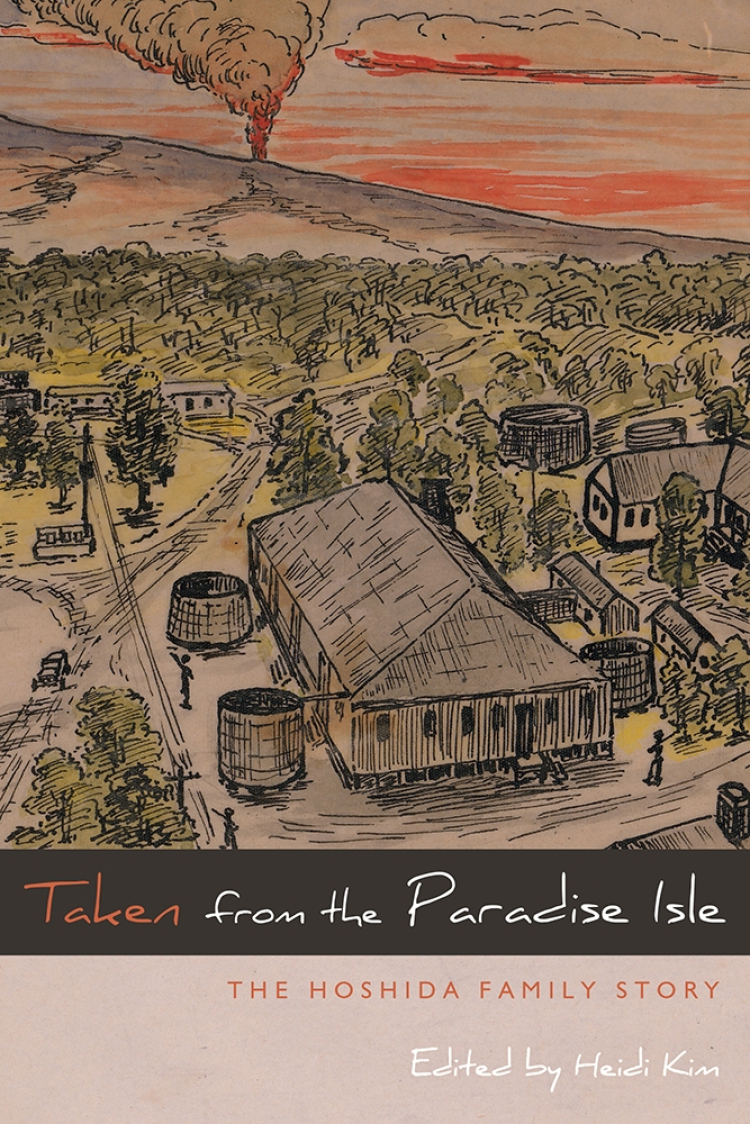 2017 Ka Palapala Po'okela Aloha from Across the Sea Award

“From the Obatas to Hatsuko Mary Higuchi, Japanese American artists depicted their lives in American concentration camps as they sought to express the sorrows engendered by incarceration. All this and more is captured by Heidi Kim’s marvelous selection of George Hoshida’s artwork and correspondence in Taken from the Paradise Isle, which poignantly documents George’s desperate attempts to keep his family intact.”
—Lane Ryo Hirabayashi, Asian American Studies, UCLA

"I was delighted to read Taken from the Paradise Isle: The Hoshida Family Story. It is beautifully done. The cover art by George Hoshida is handsomely rendered; the Foreword by Franklin Odo is superb. . . . I am very proud to have this important and useful book in my library. "
—Art Hansen, Professor Emeritus of History and Asian American Studies at California State University, Fullerton

"The Hoshidas’ narrative is a moving testament that sheds light on the special circumstances of the thousand-odd Japanese Americans from Hawai‘i who were incarcerated during World War II and the hardships they faced."

"Taken from the Paradise Isle is a solid addition to the scholarship. . . . a poignant family history based on primary documents created during the war."

"​[A]​ book that takes us right into the direct experience of the incarceration of Japanese Americans during World War II. . . . Editor Heidi Kim has done a masterful job of combining [George Hoshida's] work and official documents and adding her research to give us a very good and comprehensive picture of this family’s difficult experience."

Crafted from George Hoshida’s diary and memoir, as well as letters faithfully exchanged with his wife Tamae, Taken from the Paradise Isle is an intimate account of the anger, resignation, philosophy, optimism, and love with which the Hoshida family endured their separation and incarceration during World War II.

George and Tamae Hoshida and their children were a Japanese American family who lived in Hawai‘i. In 1942, George was arrested as a “potentially dangerous alien” and interned in a series of camps over the next two years. Meanwhile, forced to leave her handicapped eldest daughter behind in a nursing home in Hawai‘i, Tamae and three daughters, including a newborn, were incarcerated at the Jerome Relocation Center in Arkansas. George and Tamae regularly exchanged letters during this time, and George maintained a diary including personal thoughts, watercolors, and sketches. In Taken from the Paradise Isle these sources are bolstered by extensive archival documents and editor Heidi Kim’s historical contextualization, providing a new and important perspective on the tragedy of the incarceration as it affected Japanese American families in Hawai‘i.

This personal narrative of the Japanese American experience adds to the growing testimony of memoirs and oral histories that illuminate the emotional, psychological, physical, and economic toll suffered by Nikkei as the result of the violation of their civil rights during World War II.