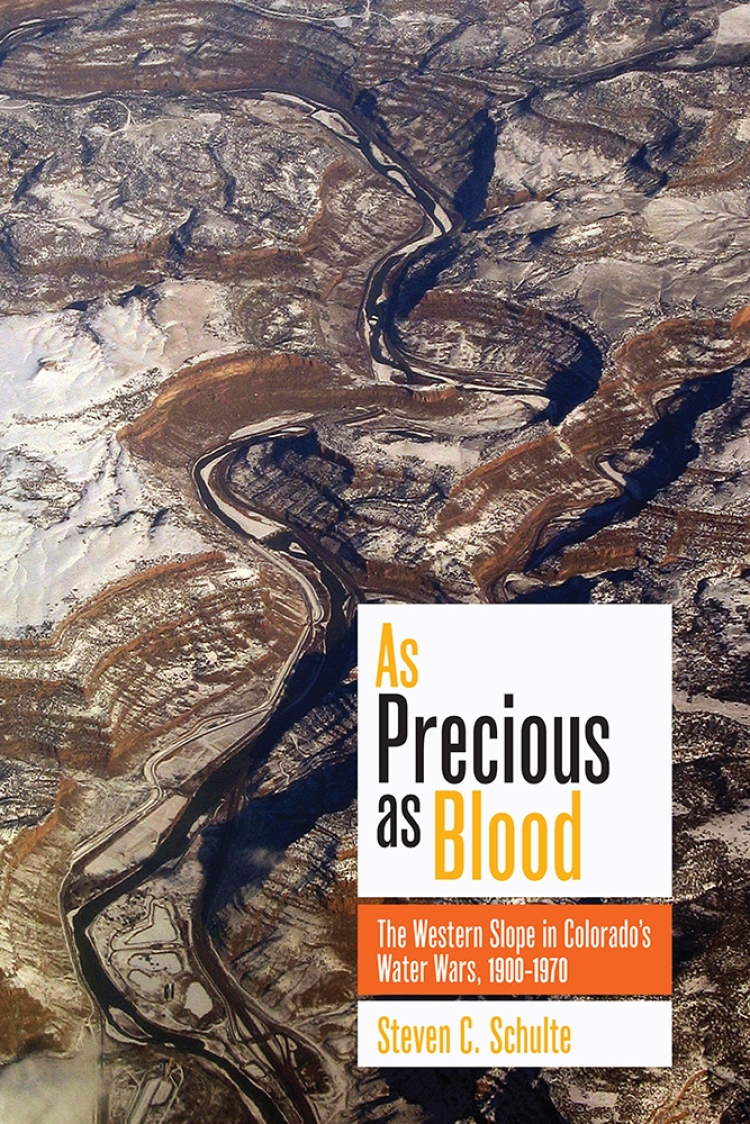 Paperback Price $32.95
Ebook Price $26.35
30-day ebook rental price $13.50
Buy Now
"This book will become the standard reference for understanding water politics in the state of Colorado in the twentieth century. . . . No other researcher has more carefully examined and described the issues related to Western Slope/Eastern Slope squabbles over water rights and water projects."

"As Precious as Blood beats with the stout heart of western slope water leadership. Out-populated but never overwhelmed, Coloradans west of the Divide have exercised political and legal muscle at every determinative turn in our state’s water future. Professor Schulte’s new book demonstrates just how hard the residents of the western slope have fought and successfully negotiated the statewide sharing of Colorado’s most precious asset—its interstate allocation of Colorado River water."
—Justice Greg Hobbs, Colorado Supreme Court Justice (Ret.), co-Director of the Environment and Natural Resources Program, University of Denver Sturm College of Law

"Schulte’s history of how water law and management have evolved in Colorado west of the Continental Divide is a trenchant, well-written, carefully researched investigation that illuminates why the exercise of power over precious natural resources is contentious. . . . This is a regional history that warrants the attention of scholars interested in the continuing importance of these debates. Highly recommended."

"It is a treat to read a history book full of great information, well-paced, and interesting. As Precious as Blood . . . solidly hits the mark on all three."
—New Mexico Historical Review

The diversion of water from Colorado’s Western Slope to meet the needs of the rest of the state has been a contentious issue throughout Colorado’s history. The source of Colorado’s water is in the snow that accumulates west of the Continental Divide, but the ever-growing population on the Front Range continues to require more municipal water. In As Precious as Blood, Steven C. Schulte examines the water wars between these two regions and how the western part of the state fits into Colorado’s overall water story, expanding the account of water politics he began in Wayne Aspinall and the Shaping of the American West.

Slow to build its necessary water infrastructure and suffering from a small population, little political power, and distance from sources of capital, the Western Slope has struggled to maintain its water supply in the face of challenges from the Eastern Slope as well as from surrounding states. Schulte explains in detail the reasons, rationalizations, and resources involved in the multimillion-dollar dams and reclamation projects that divert much-needed water to the Front Range and elsewhere. He draws from archives, newspapers, and oral histories to show the interrelationships among twentieth-century Colorado water law, legislators from across the state, and powerful members of congress from the Western Slope, who have influenced water policy throughout the American West.

As Precious as Blood provides context for one of the most contentious legal, political, and economic periods in the state’s history. Schulte puts a human face on Colorado’s water wars by exploring their social and political dimensions alongside the technical and scientific perspectives.

Steven C. Schulte is professor of history at Colorado Mesa University, where he has taught since 1989 and won the university’s Distinguished Faculty Award in 2004. He is the author of Wayne Aspinall and the Shaping of the American West and As Precious As Blood.