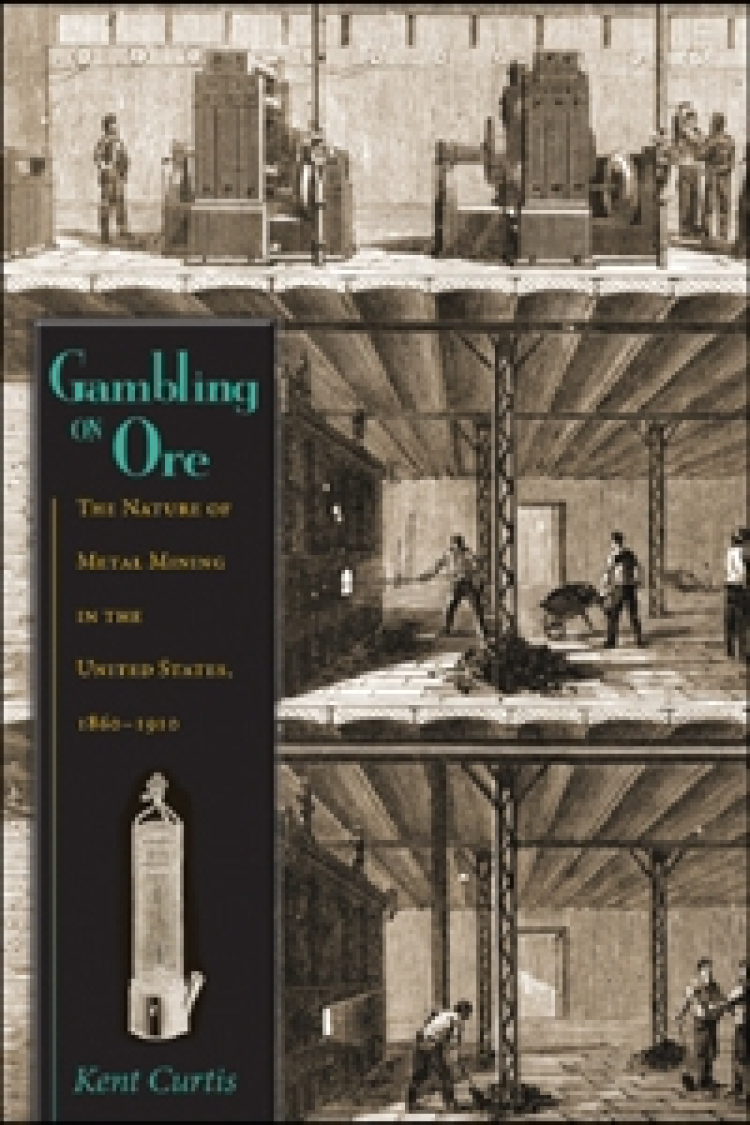 "Curtis plunges into the deep mining pits of Montana and finds a profound story about modern America and its relationship to the earth through extracting metal. It is a brilliant and yet moving story of people exploring and organizing, digging and polluting, to create our modern way of life. The writing is outstanding, the analysis is challenging, and the significance could not be greater."
—Donald Worster, author of A Passion for Nature: The Life of John Muir

"In this important book, Kent Curtis reveals that much of our current economic insanity began a century ago when a handful of gigantic corporations transformed America into a 'mining nation.' Today, when reckless corporate risk-taking seems to be the new normal, the message of Gambling on Ore could hardly be more profound and timely."
—Timothy James LeCain, author of Mass Destruction: The Men and Giant Mines That Wired America and Scarred the Planet

"Gambling on Ore is a powerful reinterpretation of western mining as an uncertain human relationship with the natural world and, at the same time, a necessary and foundational activity at the heart of a modern technological society—a mining society—dependent on metals and all of the technologies they make possible. Focused on gold, silver, and copper extraction in Montana, this compelling and beautifully written narrative weaves together the history of engineering and technology with environmental, business, and legal history to reveal how the unpredictable distribution of metals in the earth, and the economic, social, and physical structures Americans created to buffer those uncertainties, profoundly shaped the twentieth century and left powerful legacies that continue to transform local and global environments. No reader will think about mining in quite the same way again."
—Kathryn Morse, Middlebury College, author of The Nature of Gold: An Environmental History of the Klondike Gold Rush

"A century of copper mining and smelting in Montana has left an ecological wasteland marked by arsenic poisoning, toxic lakes, and mountaintops scraped into rivers. Kip Curtis's provocative Gambling on Ore helps us understand how uncertainty was at the core of such mining practices. Beautifully written, Gambling on Ore offers a new approach to the environmental history of mining in the American West."
—Nancy Langston, author of Toxic Bodies: Hormone Disruptors and the Legacy of DES

"This is a very well-written, well-argued, and thought-provoking book. . . . Highly recommended."
—Choice

"Occasionally a book is published that has significance far beyond its apparent subject; it illumines a vast landscape, opening unexpected vistas and bridging unexplored lacunae. Such is the case with Gambling on Ore. . . . This book is not just a history of American mining, it is a book that mines American history. It deserves the widest possible reading."
—The Journal of American History

"Curtis provides a comprehensive history of mining in the American West in the late nineteenth century, and his personal connections to story and place make Gambling on Ore a poignant and enlightening read."
—Journal of Arizona History

"Curtis's powerful analysis and wide contextual range should make this book appeal to a large audience of scholars in environmental history and the history of the American West, and its length, readability, and breadth of interpretation would make it valuable in graduate seminars in both areas. His innovative take on Montana's mining heritage should justify its addition to the library of anyone interested in the state's history. I hope this deserving book is read widely."
—Montana The Magazine of Western History

"The engagingly written and thoughtfully researched text offers a nuanced examination of changing social, legal, and political understandings of natural resource ownership and use in an increasingly urbanized and energy-dependent nation."

"This balanced approach should be valued and replicated by other environmental historians who venture into mining history."

"[A] highly readable and detailed account of the establishment of industrial mining in Montana. It should be of interest not only to mining historians, but also to scholars of electrification and of industrialization more generally."

Gambling on Ore examines the development of the western mining industry from the tumultuous and violent Gold Rush to the elevation of large-scale copper mining in the early twentieth century, using Montana as representative of mining developments in the broader US mining west. Employing abundant new historical evidence in key primary and secondary sources, Curtis tells the story of the inescapable relationship of mining to nature in the modern world as the United States moved from a primarily agricultural society to a mining nation in the second half of the nineteenth century.

In Montana, legal issues and politics—such as unexpected consequences of federal mining law and the electrification of the United States—further complicated the mining industry's already complex relationship to geology, while government policy, legal frameworks, dominant understandings of nature, and the exigencies of profit and production drove the industry in momentous and surprising directions. Despite its many uncertainties, mining became an important part of American culture and daily life.

Gambling on Ore unpacks the tangled relationships between mining and the natural world that gave material possibility to the age of electricity. Metal mining has had a profound influence on the human ecology and the social relationships of North America through the twentieth century and throughout the world after World War II. Understanding how we forged these relationships is central to understanding the environmental history of the United States after 1850.

Mercury and the Making of California

A History of Gold Dredging in Idaho