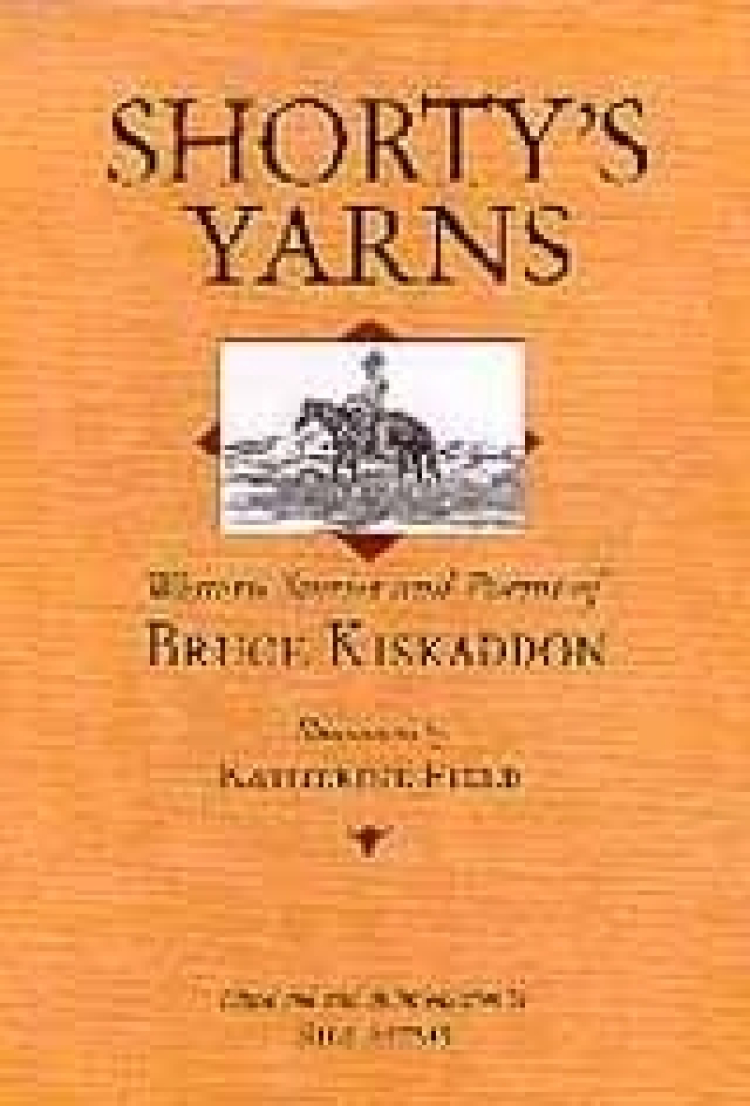 Paperback Price $21.95
Ebook Price $17.95
30-day ebook rental price $5.99
Buy Now
"Siems goes a long way to help us understand who Kiskaddon was in an excellent introduction to the collection."

"The best cowboy poet who ever wrote a cowboy poem."

"Thousands of Kiskaddon fans will be happy to have this invaluable collection available."

In the world of cowboy poetry, no poet is better known or more widely appreciated than Bruce Kiskaddon. Though he died in 1950, his poems have been at the forefront of the cowboy poetry revival that began in the 1980s and have been reprinted frequently in published collections and anthologies. What is less known is that Kiskaddon during his lifetime also published stories. These humorous, realistic prose sketches of cowboy life were almost lost, but they are in their own right gems of literary Americana on a par with the poems. Originally published in the Western Livestock Journal between 1932 and 1939, the short stories drew on Kiskaddon's experiences ranching in the Southwest and Australia to portray real life on the range. Bill Siems has recovered these stories and compiled and introduced them in this new collection, to which he has added a selection of Kiskaddon's poems and the original, accompanying drawings by Katherine Field, a fine, underappreciated western artist.

Set in Colorado, New Mexico, and Arizona, the stories are a loosely tied string of old timer's yarns with a continuing cast of engaging characters, whom Kiskaddon avoids reducing to cowboy stereotypes. They include, as Siems describes them, "Kiskaddon himself as the character Shorty. As a common waddy with a small man's feistiness and a young man's mischief, Shorty encounters the wicked world with a succession of companions: Bill, high-headed and a bit of an outlaw; Rildy Briggs, untamable and unstoppable young cowgirl; and Ike, an old-fashioned dandy and 'a very fortunate person.' More or less in the background is the Boss—actually a series of Bosses—generally affectionately respected as long as he remains democratic in his dealings with the waddies. Buffoonery is provided by a succession of pompous characters, from townspeople who look down their noses on wild, unwashed waddies to professors from the East who have read books on how ranches should be run."

Bill Siems is a member of the chemistry faculty at Washington State University, a performer of old-time music, including cowboy songs, and a longtime admirer of Bruce Kiskaddon’s poetry. His historical introduction to Shorty’s Yarns benefits from interviews with members of the Kiskaddon and Field families and other new information.

Bruce Kiskaddon (1878–1950) was born in Pennsylvania, but by his early teens had moved to Trinidad, Colorado. As a cowboy on a succession of southwestern ranches, he became especially adept at working with horses. Following a serious injury in 1906, his work began to include city employment, most often as a bellhop. Until 1924 he traveled and worked widely, both indoors and out, including two years as a drover in Australia before the war and two years in Europe with the United States Army as a mule skinner during World War I. He began to write poetry around 1915 and published his first collection of poems, Rhymes of the Ranges, when he moved permanently to the Los Angeles area in 1924. He worked at hotels and wrote for the rest of his life, producing over 450 poems and numerous prose pieces and publishing three more collections of his poetry.

Katherine Field (1908–1951) was born and lived most of her life on a New Mexico ranch. Afflicted with polio as a child, she taught herself to draw with pen and ink. The bulk of her published work consists of over 200 illustrations she created for poems written by Bruce Kiskaddon.