Conservation and American Politics, the Reagan Era to the Present 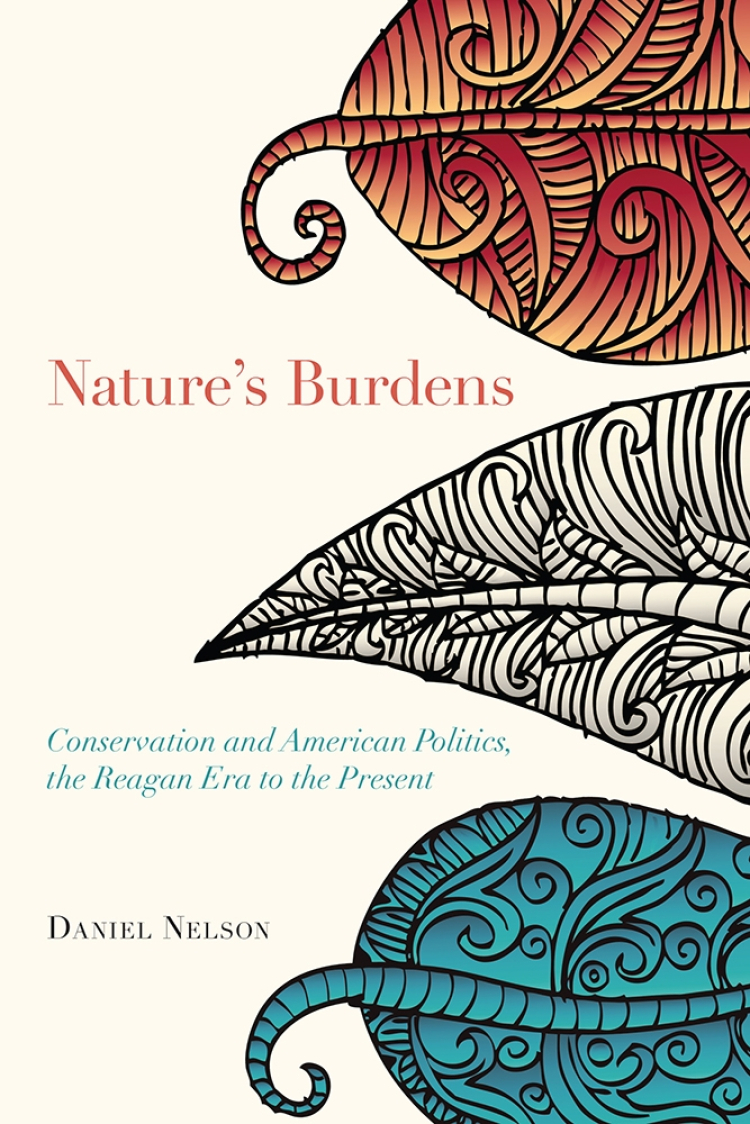 Paperback Price $31.95
Ebook Price $25.95
30-day ebook rental price $13.00
Buy Now
"This is not only a welcome contribution to the history of environmentalism but a fascinating story, rich in detail and with as much to say about the present as the past."

"A superb review of conservation developments in the United States. Nelson captures both the accomplishments and challenges environmentalists have faced and continue to encounter. Fully grounded in both primary and secondary sources, this well-written and logically organized volume should be a 'must-read' for anyone interested in environmentalism."

"Add Nature’s Burdens to the shelf of indispensable histories of American conservation. Anyone concerned with the challenges imposed by this age of accelerating global environmental change would do well to heed the insights provided by Nelson’s surefooted history."

"Nature’s Burdens offers a compelling analysis of conservation policy since the 1980s. The book will be worthwhile reading for anyone interested in not just preserving but restoring the natural world."

"[F]ills an important space in the world of environmental policy writing. . . . The strength of Nelson’s work lies in his ability to lay out the changes in conservation policies over time without getting bogged down in any one place. He lays out sufficient detail to make his points, then moves on to the next critical topic, such as ecosystem management, ecological corridors, or the evolution of national parks. Readers see forest and trees. Highly recommended."

​"[A] deep, detailed dive into the history of conservation legislation​. . . . the author shows how nature doesn’t recognize our politically influenced rules and borders and boundaries; the interdependence of nature extends way beyond our political compromises. . . . One of the compelling narratives in this book is how what environmentalists and conservationists are trying to change has evolved with scientific—and to some degree, philosophical—theory on species and land management."​

“Its coverage is impressive. . . .Graduate students and specialists in American Environmentalism will appreciate Nelson’s work as a “one stop” resource for late-century conservation efforts.”
—Pacific Northwest Quarterly

Nature’s Burdens is a political and intellectual history of American natural resource conservation from the 1980s into the twenty-first century—a period of intense political turmoil, shifting priorities among federal policymakers, and changing ideas about the goals of conservation. Telling a story of persistent activism, conflict, and frustration but also of striking achievement, it is an account of how new ideas and policies regarding human relationships to plants, animals, and their surroundings have become vital features of modern environmentalism.

In the 1960s and 1970s, Congress embraced the largely dormant movement to preserve distinctive landscapes and the growing demand for outdoor recreation, establishing an unprecedented number of parks, monuments, and recreation areas. The election of Ronald Reagan and a shift to a Republican-controlled Senate brought this activity to an abrupt halt and introduced a period of intense partisanship and legislative gridlock that extends to the present. In this political climate, three developments largely defined the role of conservation in contemporary society: environmental organizations have struggled to defend the legal status quo, private land conservation has become increasingly important, and the emergence of potent scientific voices has promoted the protection of animals and plants and injected a new sense of urgency into the larger cause.

These developments mark this period as a distinctive and important chapter in the history of American conservation. Scrupulously researched, scientifically and politically well informed, concise, and accessibly written, Nature’s Burdens is the most comprehensive examination of recent efforts to protect and enhance the natural world. It will be of interest to environmental historians, environmental activists, and any general reader interested in conservation.

Daniel Nelson is professor emeritus of history at the University of Akron, where he taught business and labor history for three decades. He is the author of a half dozen books, including Northern Landscapes and A Passion for the Land, and more than fifty essays and articles on industrial history, public policy, and environmental topics. An enthusiastic hiker and gardener, he is also active in a variety of local and national environmental organizations.