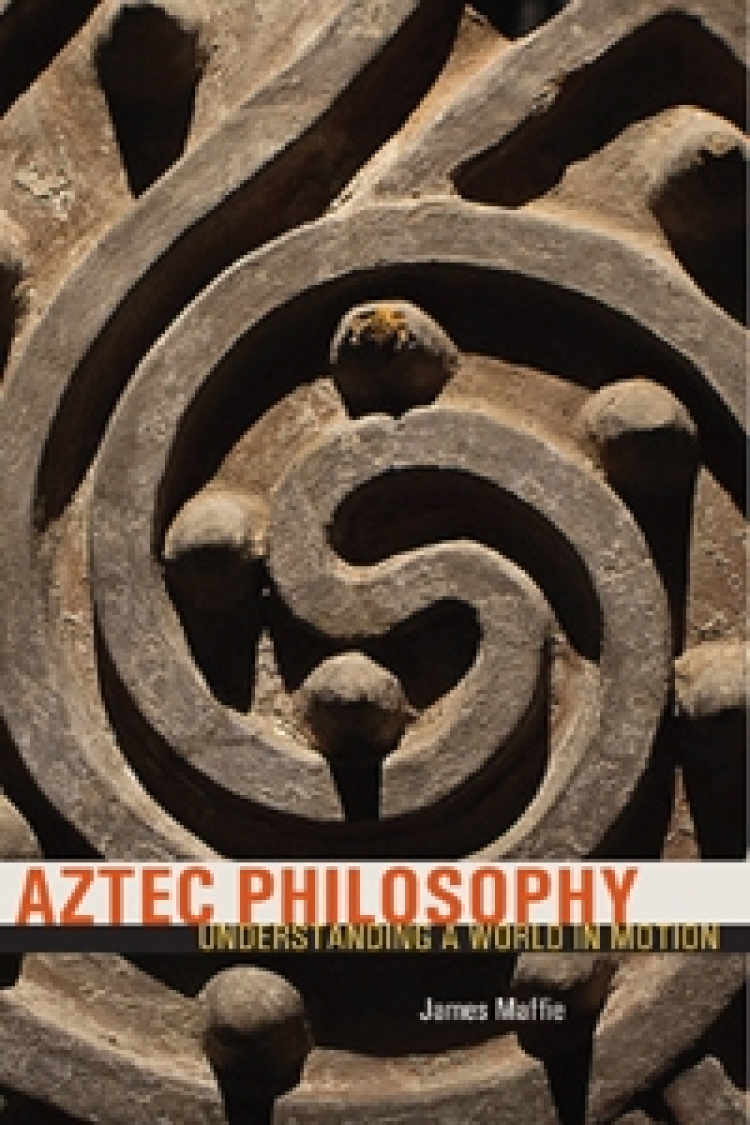 "Stunning . . . a major breakthrough that will be a game-changer in Mesoamerican studies."
—Alan Sandstrom, Indiana University–Purdue University Fort Wayne

"In this comprehensive study, James Maffie offers much more than an introduction to Aztec philosophy. For the reader unfamiliar with the Náhuatl-speaking people of the Central Valley of Mexico, whose capital Tenochtitlan was conquered by Hernán Cortés in 1521, Aztec Philosophy offers a close examination of Nahua life, thought, and culture; for the anthropologist and Mesoamericanist, it offers a philosophical lens through which to examine and evaluate standard interpretations of Aztec life and society; for the student of philosophy, it reconstructs a systematic and coherent worldview and provides enough material to pursue graduate-level research; and for any reader, it is a model of how to bring multiple disciplines to bear on a topic that is beyond the scope of any one discipline."
—Notre Dame Philosophical Reviews

"For scholars interested in indigenous heritage philosophy of the Americas, this text will delight with its metaphysical playfulness. It is, however, to be taken seriously. For if Maffie is correct in only some of his disagreements with traditionally received views, he has forever changed the weave of the rug! . . . I highly recommend this book to anyone wanting to know more about the heritage philosophies of our native soil. And all American philosophers should be familiar with the metaphysics of these philosophies if they hope to have any kind of understanding of their own philosophical influences since coming to the Americas!"
—American Philosophical Association Newsletter on Indigenous Philosophy

"An elaborate, fascinating, and crucially important study of Aztec metaphysics. . . . Maffie sets out to prove that the Aztecs not only had a philosophy, and a radically different one from the Greco-Christian West, but did philosophy as well. His account of this philosophy is fascinating and important, worthy of the best anthropology. Marshaling evidence from a number of sources (textual, graphic, archaeological) and necessarily disputing the claims of some of his scholarly predecessors, he describes a metaphysics so foreign to Western-Christian thinking that it should and must make us pause and consider the ground of Western philosophy and religion."
—Anthropology Review Database

"The originality of this metaphysics shines through."
—CHOICE

“Aztec Philosophy not only provokes several debates within Aztec studies but also offers some excellent, new, and innovative interpretations of Aztec cultural traditions such as ball games and the religious practice of sweeping. The book’s rich linguistic, pictographic, historical, anthropological, and archaeological analysis will also serve as a valuable source for scholars and students interested in ancient Mexican culture.”
—Journal of Anthropological Research

"In a brilliant work . . . Maffie attests that the Aztec way of thinking is singularly sophisticated and possesses an internal coherence by analyzing a combination of a considerable amount of data from written sources, iconography, history, and auxiliary sciences, which exemplify the truly systematic nature of this culture. . . . This is why you must read this book."
—L'Homme

"Maffie’s work is solid, detailed, and thought-provoking, an excellent read not only for those interested in pre-Columbian American philosophies but also for metaphysicians and philosophers in general. . . . Aztec Philosophy is a major study on its topic and a powerful contribution to comparative philosophy."
—SOPHIA
"An outstanding book, exceptionally rich in information, sharp theoretical speculations, and interesting applications."
—Process Studies
"I would recommend this book to anyone with a professional interest in Aztec culture, or Mesoamerican culture more broadly. It is worthwhile to a wide audience, including philosophers, historians, theologians, anthropologists, and archaeologists. . . . In reading this book, I feel as if I have not only increased my knowledge of Aztec culture. . . . I feel as if it has altered my own personal philosophy of how to Be in the world, or better, how to engage in an active process of Becoming."
—Anthropology News
"[Maffie's] careful and in-depth study is obviously a significant contribution to Nahua studies, but it is a game-changer for future scholars in philosophy insofar as it can serve as a foundational text to examine, debate, and develop. . . . I can’t help expressing my deep sense of gratitude to Maffie for writing this book. His work demonstrates a breadth and depth that is truly impressive, and it is done with the rigor that one would expect from a top scholar in any area in the history of philosophy. . . . Perhaps most importantly, Maffie undeniably puts Nahua philosophy on the philosophical map and does so in a way that unambiguously opens up a new and attractive area in academic philosophy, and for that, he has done us all a tremendous service."
—Inter-American Journal of Philosophy
"[A] comprehensive and beautifully argued account of Aztec (Mexica-Nahua) metaphysics. At 527 pages with over 1800 footnotes, it exercises a dazzling methodological and empirical precision and constitutes one of the most important treatises on Mesoamerican philosophy to date. It engages with and revises what have heretofore been the predominant interpretations of Nahua philosophy by the most important scholars in anthropology, linguistics, ethnohistory and literature. . . . Maffie’s book is an exemplary exercise in interdisciplinary scholarship and will be invaluable to scholars from diverse fields. . . . The simultaneous clarity and poetic repetition make his argument not only convincing but stellar."
—Bulletin of Latin American Research
"A masterful exposition of a fascinating topic."
—Ethnohistory

"A rare academic masterpiece."
—New Statesman Books of the Year, 2020

“An excellent piece of scholarship. . . . Maffie’s book has given Aztec philosophy and culture a renewal of which both he and the Aztecs can be justly proud.”
—Philosophy in Review

In Aztec Philosophy, James Maffie shows the Aztecs advanced a highly sophisticated and internally coherent systematic philosophy worthy of consideration alongside other philosophies from around the world. Bringing together the fields of comparative world philosophy and Mesoamerican studies, Maffie excavates the distinctly philosophical aspects of Aztec thought.

Aztec Philosophy focuses on the ways Aztec metaphysics—the Aztecs' understanding of the nature, structure and constitution of reality—underpinned Aztec thinking about wisdom, ethics, politics, and aesthetics, and served as a backdrop for Aztec religious practices as well as everyday activities such as weaving, farming, and warfare. Aztec metaphysicians conceived reality and cosmos as a grand, ongoing process of weaving—theirs was a world in motion. Drawing upon linguistic, ethnohistorical, archaeological, historical, and contemporary ethnographic evidence, Maffie argues that Aztec metaphysics maintained a processive, transformational, and non-hierarchical view of reality, time, and existence along with a pantheistic theology.

Aztec Philosophy will be of great interest to Mesoamericanists, philosophers, religionists, folklorists, and Latin Americanists as well as students of indigenous philosophy, religion, and art of the Americas.

James Maffie is principal lecturer in the Department of Philosophy and affiliate of the Latin American Studies Program at the University of Maryland.